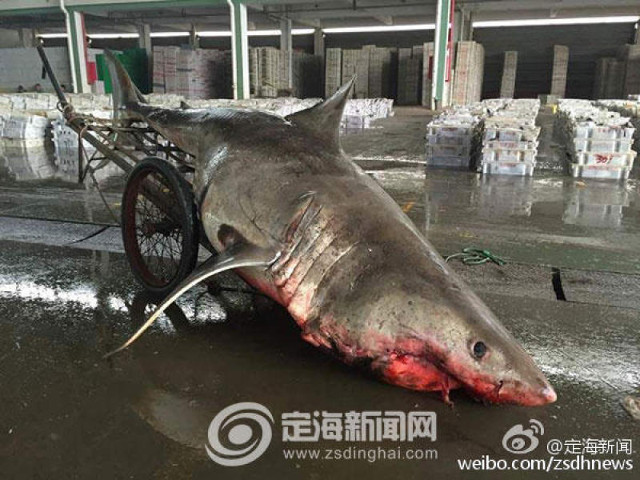 Wang Xianjin told NetEase reports He did not know the shark was in his nets as it was pulled into the boat during rough weather conditions around midnight.

After the shark was brought on board it thrashed around tearing the net before expiring on deck.

Mr. Xianjin had taken the shark to the local fish market looking for a friend to help him transport the shark.

The Shanghaiist reports Xianjin rejected offers of up to $1541.00 to buy the shark, instead he planned on donating the shark to a museum.

The unintended netting of this great white shark illustrates an issue that has become an unfortunate side effect of commercial fishing called bycatch. When fisherman catch non target species it can quickly up set the delicate Eco balance of the ocean.

The Pew Charitable Trusts and Cartoonist Jim Toomey created a video that gives a great explanation as to how bycatch works.

“In commercial fishing, this (bycatch) happens on a huge scale: nets and fishing line often stretch for miles, indiscriminately snaring all manner of life – including
whales, porpoises and sea turtles and even birds – including whatever they meant to catch in the first place – the so-called target species.

For example, a type of gear called a drift gill net, used off the California coast to catch swordfish, also catches a host of non-target species, including dolphins, sea lions, blue sharks, and even whales.

Shrimp trawlers drag nets along the seafloor hauling up enormous quantities of wildlife, all in the pursuit of a few, precious shrimp.

Aside from having to explain to fishermen that, really, they were looking for someone else, bycatch is a big problem.

First, even when fishermen throw bycatch back, most of the creatures are usually dead or dying. Second, a lot of juvenile fish get taken as bycatch, meaning they never get the chance to have babies; that can upset the predator-prey balance and disrupt entire ecosystems. Third, threatened or endangered species are often landed as bycatch”.

You can find out more about bycatch and what you can do to help prevent it at http://www.pewtrusts.org/en/research-and-analysis/issue-briefs/2015/03/waste-not-want-not