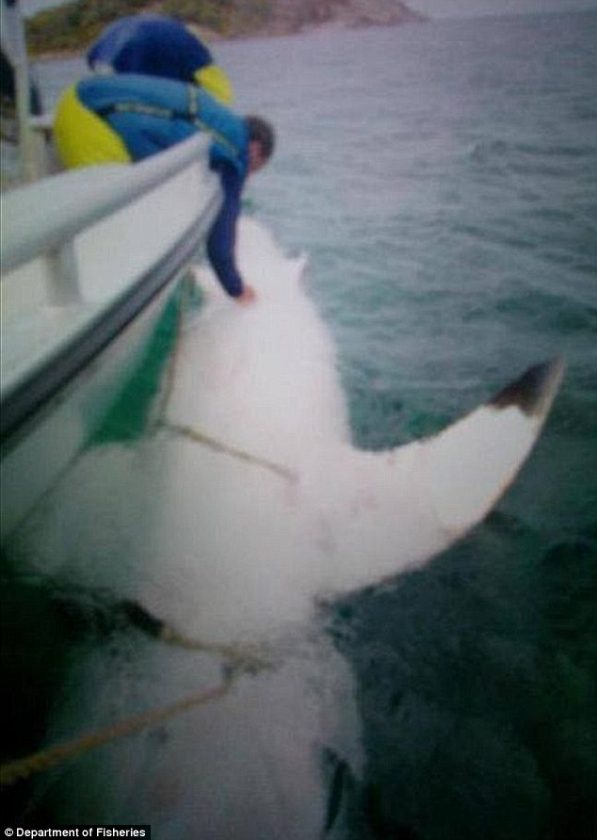 An estimated 16-foot (4.9m) great white shark has been tagged off Albany’s coast. Due to her massive size, estimated to be around 1.6 tons (3,200 lbs.), she has been given the name Joan of Sharks.

Recently a distressed whale calf became beached close to shore and it is believed Joan came to grab a bite to eat. After closing the beach, the state government’s shark monitoring network immediately sent a team to the location. Department of Fisheries employee Mark Kleeman explained what happened next.

“In that photo, the shark is upside down, which induces a state called tonic immobility,” he said. “In a sense, the shark basically goes to sleep, which enables our technical officers to do a small surgical procedure to implant an acoustic tag inside the shark’s gut cavity.”

Rolling the shark on its back creates a state of tonic immobility, preventing the shark from moving. This allows the team to take tissue and blood samples, as well implant or tag the shark. After which the shark is rolled over.

“In this instance the shark came almost instantaneously back to life. So she was quickly released and she swam off very strongly,” Kleeman said. 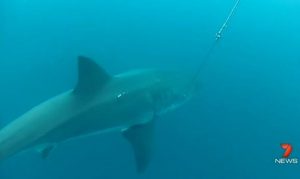 The implanted acoustic tag will emit a signal that can be picked up on receivers placed in the ocean which will allow researchers to track her movements.

“For the next ten years, we’ll be able to keep a track of her movements, which is going to open up a whole new world. We’ll have a better understanding of the large-scale movements of white sharks,” Kleeman said adding that the size of the shark is “potentially a world first”.

Update: An estimate 22-foot-long white shark was photographed off the coast of South Australia.