Eton Polly and two of his friends were enjoying a baited shark dive in the milky waters of Durban, South Africa when a 9-foot-long oceanic black tip shark became a little too curious. It bumped one of the divers, who immediately pushed the shark away.

An unidentified diver who was filming the interaction with his GoPro camera became part of the action when the shark turned and charged him.

The diver’s mask and regulator were knocked off by the shark’s contact.

Polly said the shark might have been startled and was trying to leave the area when it rammed the diver.

However, based on the video, the shark likely bumped into the diver purposefully.  A close examination of the footage appears to reveal the shark’s eyes were closed and its fins were turned downward in an aggressive posture.

While the position of the fins might have been a sign of aggravation, the shark did not have its mouth open when it rammed the diver.

Polly said neither diver nor shark was injured.

Shark diver Eli Martinez recently shared a unique shark encounter of his own.

In another incident, a 12-foot tiger shark nearly took a nibble of an unsuspecting diver during a shark dive off Tiger Beach, Bahamas.

The footage, taken in 2014, shows a large tiger shark nicknamed Hook swimming around the dive master while a second diver, Joe Wong, headed toward the surface.

Wong was focused on his ascent when Hook decided to get a closer look at the diver.

Martinez was watching the shark and quickly realized it was heading straight for Wong. 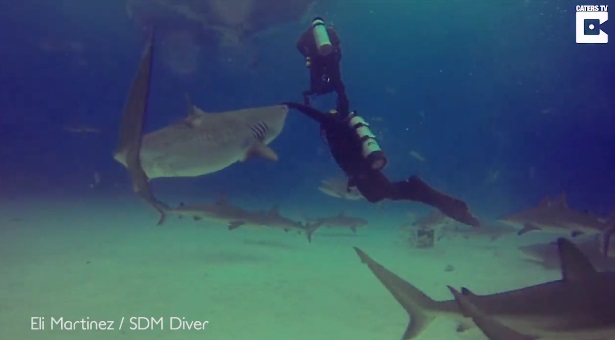 The professional shark diver quickly swam upward to intercede, and he pushed the large shark down and away from Wong’s legs, preventing an investigative (test) bite.

Tiger sharks are known as the trashcans of the sea and have been known to eat a variety of objects.

Divers who encounter tiger sharks should always keep a close eye on them, as they are ambush predators and tend to approach from behind.

In 2014 a shark diver disappeared while diving off Tiger Beach.

Dr. John Petty was separated from his dive board around 6:30 p.m. While it remains unconfirmed as to whether Dr. Petty passed away due to drowning or a medical ailment not related to a shark attack, some of the 63-year-old’s shark-bitten gear was later recovered.

On June 2, 2017 a swimmer lost an arm to a suspected tiger shark attack off Athol Island, Bahamas.

Tiffany Johnson was snorkeling when a large shark approached her from her right side.

“I felt like a tug or bump on my arm. I honestly thought I had bumped into something, that’s what it felt like,” the mother of three recalled from her hospital bed.

Little did she know a gray, medium-sized shark was beside her.

“I causally looked to the right and I was face-to-face with a shark, and he had my arm in his mouth.”

The shark had severed the 32-year-old’s arm at the elbow.

There have been a total of 10 shark attack bites* in 2018, 0 of which were fatal**; 0 were reported in the US, with 0 occurring in Florida and 0 in Hawaii. Six have been reported in Australia, none of which was fatal. One unconfirmed worldwide and not included in the total count.

*three with no injury **one possible scavenge