I never saw him coming.

Perhaps it was better that way.

There is something about seeing a shark while scuba diving that always gets the blood flowing and brings sharp focus to the moment. This particular encounter had another flavor altogether.

My dive buddy, Chas Broughton, grabbed my arm to get my attention and raised a hand to his forehead, fingertips pointed up like a fin — the international symbol divers use when there’s a shark in the neighborhood.

I looked right and left, up and down. No shark. I decided to turn on my camera in case he came back. Watching the footage back at home, I see how the shark surprised me as I fiddled with various knobs. He came up behind me and on my left, appearing just over my left shoulder. Thanks to the lack of peripheral vision from my mask, the first time I saw the beast he was already upon me, nothing but head and teeth, cruising by about 1 foot from my face.

I wish I could fully convey the heart-stopping feeling of that moment. It wasn’t garden-variety fear. It was more akin to the feeling you get when someone jumps out from behind a door to scare you. BOO! That was the feeling. Startled.

Once he made his pass over my shoulder, all I could think about was keeping the camera on him as he cruised around between me and my diving partners. At least that was all I was thinking about right up until he suddenly charged at me, snout up in the air, pectoral fins rigid. Then I forgot about filming him. I raised my tripod up and fended him off with a jab to the snout. Watching the footage, you can actually hear Broughton laughing into his regulator in the background as I dance with the six-foot shark.

Marcus Drymon, a shark scientist at the Dauphin Island Sea Lab, said our visitor was a sandbar shark, one of the more common residents of Alabama’s nearshore areas. They are frequently mistaken for bull sharks by swimmers and fishermen alike, Drymon said.

Sandbars range in all the world’s warmer oceans, seen most frequently close to reefs and wrecks. They give birth to live young, which are supported in the placenta via umbilical cords. I once watched Drymon dissect a pregnant female that had eight small sharks in its belly, each tiny, perfect replicas of the mother.

“That’s beautiful footage of a juvenile sandbar shark, given away by the size of his primary dorsal fin, and its placement (anterior) along the body,” Drymon said via email. “I’ll wager this was taken somewhere in the reef permit zone, which is, interestingly, the only real spot we catch these guys… And they’re known for being…curious (i.e. aggressive).”

Drymon said he typically deals with sandbars during the Alabama Deep Sea Fishing Rodeo. They are around 6 feet long when full grown. Drymon speculated the shark we encountered might have been about 15 years old.

“They are one of the most often landed sharks, and almost always called bull sharks. In reality, there are very few things in common between the two species,” Drymon said. “While historically the most targeted shark in the US commercial shark bottom longline fishery, sandbar sharks are now protected since 2010… What’s cool about these guys is that we’ve seen their populations increase in the reef permit zone between 2010 and 2013, suggesting that the management measures may be working.”

We got to watch our shark eat a small sheepshead, the muscles in his head rippling as he chomped on the fish. We swam after the shark, watching as he worked his jaw vigorously, his gill slits flaring. Apparently, though, eating fish is tougher than it looks. I assumed he was chewing the fish to bits with all the jaw action, but I think he was actually trying to turn it around in his mouth so he could swallow it head first, which would push his prey’s fins down. (You can watch the action on the accompanying video.)

Sheepshead, which are members of the porgy family, are notoriously spiny. The dorsal fin in particular has strong and rigid spikes. Even on a small fish, they can be up to two inches long and needle sharp. After swimming 50 or 60 feet, the sheepshead suddenly popped out of the shark’s mouth, hit the bottom and took off at high speed. The shark gave chase, disappearing into the gloom after the sheepie. I’d like to think the little guy got away. 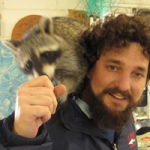 Ben Raines is the executive director of the Weeks Bay Foundation, a non-profit land trust dedicated to preserving coastal Alabama. You can reach him at Ben@weeksbay.org, or via Facebook and Twitter @BenHRaines