Today we are speaking with Sarah Beardmore, part of the team behind the DORSAL shark reporting app.  The app is designed to inform users of reported shark sightings and interactions in their local area through push notifications.  Not only can users see reports of shark sightings, but they can also report sightings of their own.

What is the main purpose of the DORSAL shark reporting app?

To save lives by providing the world’s most reliable, advanced and trusted shark sighting and alert management solution. We keep the public informed and believe they have the right to know about shark sightings so they can make educated beach related decisions. We also want to provide the public an opportunity to be responsible with their sightings and reports

Saving lives is a tall order.  How did DORSAL get its start?

Allan Bennetto started DORSAL as a side project after a series of shark attacks in Australia. In one of these incidents a Tasmanian diver [Damien Johnson] was attacked and killed in front of his daughter. A few days after the attack several fishermen reported they had seen a similar size/species shark in the area the day before and the morning of the attack. They expressed they had no way to share this information, and this is where the idea started.

I had competed for surfing internationally for over 10 years. Growing up in Western Australia and now residing in the Northern Rivers, where a number of fatalities have taken place, this project hits close to home.

Have you had any reports of the app helping prevent negative interactions?

Prior to a few of the recent attacks in Australia we have had shark alerts on the app of a similar size/species of shark at the same beach just hours before the attacks. I think it is difficult to measure prevention, but what we do know is that we get a lot of families thanking us around these attack times for keeping them informed. It seems they made the decision to go to a different beach. 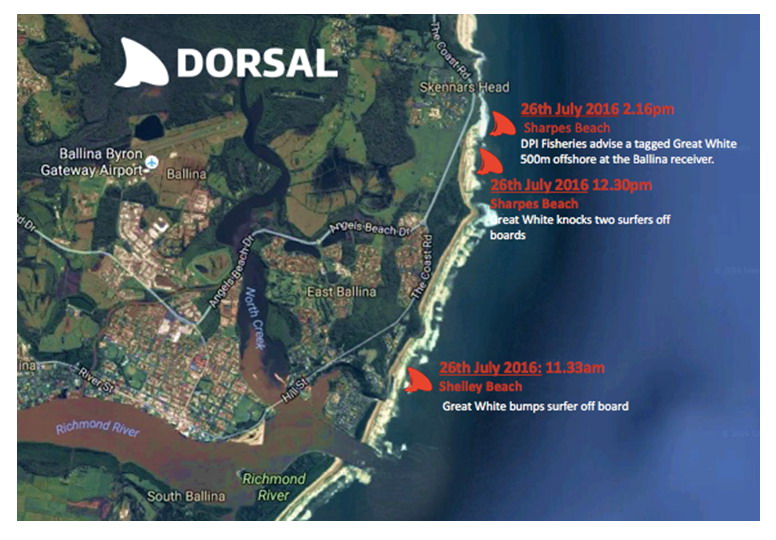 Here is an example of a recent pattern that was recorded in Ballina NSW involving a couple of close encounters.

Regarding the submitted sightings, how accurate have you found them to be? How quickly are they vetted? Can users submit sightings via the app?

Users can submit sightings via the DORSAL website or the mobile app. We have a six-step verification process. It is about following the protocol and using common sense. We generally try to speak to each of our users before releasing reports, and we have a couple of techniques in which we can easily filter false reports. Often there will be a couple of reports from different users of the same sighting.

Do you have plans on adding photos to the app?

Users can currently upload media (video and photos) in the app. In our roadmap we plan to highlight the shark related content for our users

Have you had positive results from the app since its creation?

We have received great feedback from the app. We have over 250k users and this is pretty much all organic. We receive positive feedback and reviews from a variety or people from families to surfers to those who just like to know what’s going on in their local beaches.

There was so much information, Tracking Sharks is breaking the interview into two parts.

In the mean time, be sure to grab your free copy of DORSAL (which covers reports for both the US and Australia) for Android and ios.

*Editors Note: While DORSAL is a great app and assists in spotting sharks, users must use their own discretion when entering the water.