Today we pick back up with part 2 of our interview with Sarah Beardmore from the DORSAL Shark Reporting App.  Sarah has already given us some of the background info on why DORSAL was created.

How successful has the app been in Australia?

The app has seen most of its success in Australia. This is where DORSAL was launched so people have been using our service for longer. Northern NSW and Western Australia have the most reports. The reports can go quite viral on Facebook. In my opinion, I think people genuinely care about friends and family and Facebook provides an opportunity for users to share reports and keep people informed on a social level.

I noticed you have a large following on the DORSAL Australia Facebook page. It’s great to see everyone coming together to look out for each other. What made you decided to branch out to users in the USA?

We did a USA soft launch in May after a double East and West Coast attack on Memorial Day weekend.

When it comes to the United States, I have to ask about Florida, the shark bite capital of the world. How do you accurately cover such a large area?

The way the DORSAL platform has been developed is a pretty easy process and allows DORSAL Moderators to access the system from anywhere in the world. The DORSAL CMS is the backbone to the entire system, receiving and filtering all reports from the various input data and then pushing them out to the DORSAL users.

In addition to the website, a DORSAL CMS app, verifying tools and Dashboard is also available to make receiving, reviewing and posting reports mobile and even faster.

Then we have DORSAL Scan which is a custom web tool regularly scanning various websites, around the globe to alert DORSAL moderators to public and official shark sightings and reports. The DORSAL technology enables us to cover any region, small or large!

Speaking of large regions, I know that you have helicopter pilots that often file reports in California. Would you elaborate on how you receive these reports?

Sure thing. DORSAL GPS allows pilots and boat crews to hit a button while in the air or on water when they see a shark. The GPS coordinates are then registered and a report is automatically generated into the DORSAL backend with the following details:

Instead of having to radio or log the sightings and download when back on land, they can log a report from in the air, which goes immediately into our database for verification. We then send out the report to our users via the Apps, website and social media sites.

How do you handle tagged sharks? I know shark taggers OCEARCH recently completed an expedition in New York.  Several of the newly tagged sharks and a variety of the old have been tracked swimming close to beaches. Do you monitor their tracker and report it via DORSAL?

At the moment we rely on the DORSAL scan technology and checking the OCEARCH App and Twitter accounts. We are currently trying to connect with OCEARCH to discuss potential collaboration. One idea is to build a geo-fence close to shore around the DORSAL regions so that when a tagged shark is pinged close to shore it comes through as an official report to the DORSAL users.

That would be a great way to help people and sharks. Speaking of which, we know negative shark encounters are extremely rare. How should users interpret the data DORSAL provides?

We try and provide as much information in the reports as possible. If, for example, Specialized Helicopters report some juvenile Great Whites and they note in the report that they are not acting aggressively, it is important for us to share this information. We don’t want to scare people with our service; it is about providing the public with information that enables them to make better educated decisions about when and where they enter the water.

There are many examples where there have been multiple interactions within a few hours or days at the same location, sometimes with devastating effects. Our service is about informing the public of those sightings. It doesn’t mean that you are 100% safe, but it’s about reducing your risk.

There have been several shark reports coming from the Mediterranean Sea and a recent shark bite in Spain. Do you plan on expanding the app? Has translation been an issue?

Yes, we plan to expand and have a couple of locations at the top of the list. I would personally like to see us launch in Reunion Island soon because tourism (especially surf tourism) has rapidly declined. From what I know, surfing competitions have been banned here for many years and, being a professional surfer, this is a real shame. We are able to easily expand; we just need to set it up so we have assistance in each region. Translation hasn’t been an issue for us yet as we have launched in predominantly English speaking regions.

There are currently several shark reporting apps on the market. What makes DORSAL different?

For starters, DORSAL isn’t just an app, it’s actually a full end-to-end shark management platform and comprised of many moving parts. At the moment, most apps are aligned with a research body or focused on small regions and don’t allow public sightings to be submitted or distributed. 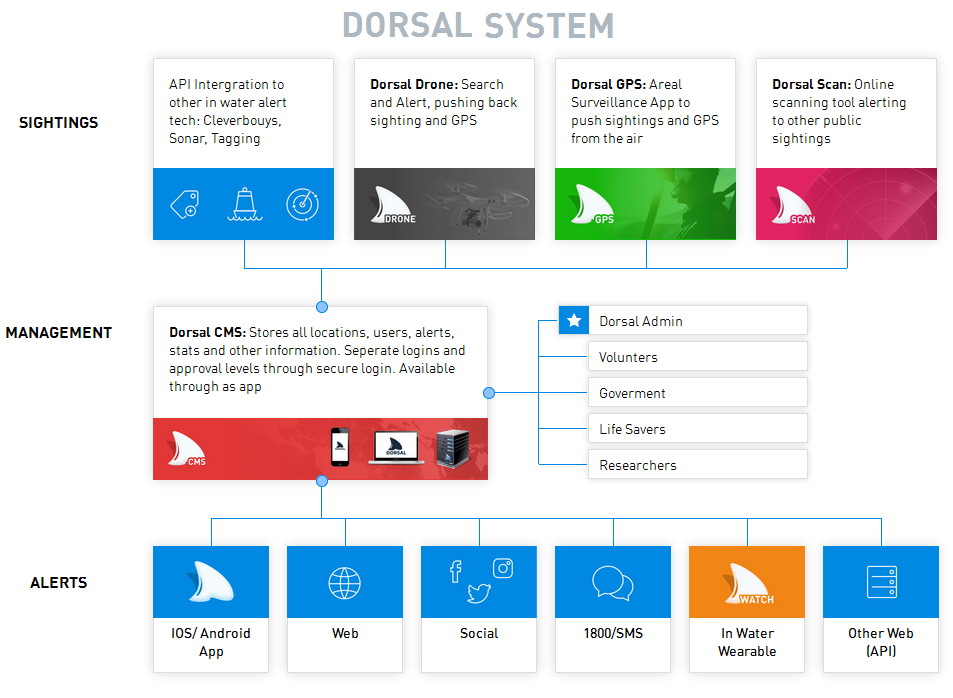 With DORSAL, you get access to every single sighting and report from the web, all official and public sightings as well as being able to submit your own sightings as well. We also allow you to customize the experience to sightings near you as well as access our reports not just from the app, but from our website and social media pages. We are also working with companies such as Specialized Helicopters to provide air and sea to land reports as well as drone operators to improve the number and speed of sightings. And soon, we hope to be releasing an” in” water wearable to enable our reports to be received while in the ocean.

We think all of these things separate us from what is currently available. We are not out to just create an app, we are setting out to provide a full service system that provides the widest and fastest sightings and alerts globally.

I will admit, I really like the app and look forward to seeing it succeed.  I noticed there are no ads on the app. How are you able to offer the app for free? Will you ever charge?

Right now we are volunteer based, which has worked really well. As we expand into other regions we will most likely incorporate some kind of advertising model.

I, for one, appreciate all your hard work. From personal experience, I know that it can be tough to fund a project. What do you see as the biggest threat to sharks?

Obviously there are mixed opinions out there. My opinion and it is the same for every animal out there, humans [are the threat], right? Whether it is poaching, culling or climate change, I think this is the obvious answer.

Good point. We are stewards of the earth and need to be conservation minded.

Last question, what is your favorite shark movie and why?

That’s easy, but I don’t need a movie (even though there was one made about her titled Soul Surfer). Bethany Hamilton is a fellow competitor and I am so inspired with how she has come back from the shark attack that left her with one arm. She still charges and gets the sickest barrels!

Tracking Sharks thanks Sarah for taking the time to share the background on the DORSAL shark reporting app.  A free copy of the app is available on both ios and android.  The website is dorsalwatch.com Twitter @DorsalWatch  and Facebook