A surfer bitten by a shark off Juno Beach, Florida, believed it would never happen. 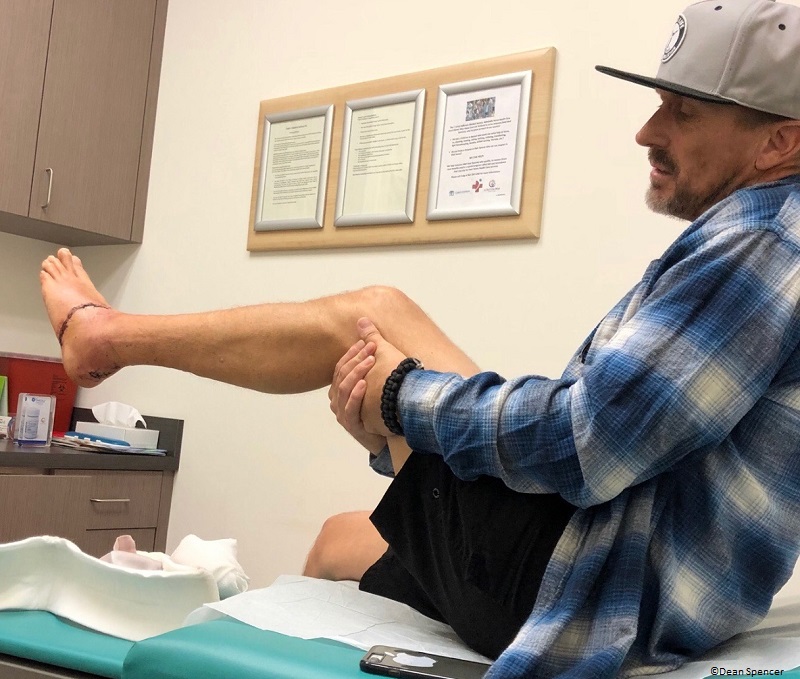 Dean Spencer, 48, grew up in Venice Beach, California and was used to seeing sharks, including great whites.

“I have had many encounters over the years with all sorts of sharks from Hawaii to Mexico, to Cali, to Florida,” he told Tracking Sharks.

“But no experience did I have that led me to feel as if I would be a victim of a shark attack. I always figured I was exempt. Why? Just a gut feeling. I have always felt as if I was meant to be in the ocean.”

Unfortunately, the Florida realtor was not exempt as he would learn when he hit the waves Nov. 24, 2018.

Around 5 p.m. he paddled out approximately 150 to 200 yards from the beach and waited on a wave.

“It was a great day, good surf, nice out, paradise. I rode one wave, then dove under the next breaker and when I did, the shark swallowed my foot,” he said. The shark thrashed him around and eventually let go.

He was able to paddle back to shore and head to the hospital.  The doctor used so many stitches to close the three torn tendons and one artery, that they lost count on the number of stitches.

Spencer noted that a few fishermen were casting lines down the beach and he thinks that may have enticed the shark closer to shore. He also has qualms with shark diving operations that bait sharks close to shore. “. . . those sharks are coming closer and closer to our shores every year.”

His shark encounter will not keep him out of the water, and he hasn’t changed his opinion on sharks.

“I like sharks, they are amazing creatures, scary sometimes, yet flawless in the way they move.  They have a keen sense of smell/vibration in the water, and as long as I don’t find myself to be on their dinner menu, I am good with them being around.”

The location has been marked on the 2018 Shark Attack Map.