Have you ever wondered how great white shark populations are counted? I spoke with Dylan Irion who has been working with working with Oceans Research, a marine and terrestrial research and conservation organization based in South Africa, for six years.  He graduated with a BSc in General Biology from the University of Maryland, U.S. in 2008 and an MSc in Applied Marine Science (Zoology) from the University of Cape Town, South Africa in 2013. He’s currently carrying out a new white shark population assessment that will encompass several areas of the South African coastline.

Why is a wider assessment on white shark populations required if local ones have already been conducted?
There have been population estimates in Mossel Bay, Gansbaai and False Bay in South Africa using the same method of photo identification put into a mark recapture model and that gives you a super-population. You would think that you could add those together to get a national population however the issue with that is that the sharks move between these sites so it is possible to double up on the counts. Also, if one area is sampled more frequently at a certain time of the year it could affect the data: e.g. we haven’t seen white sharks in Mossel Bay in December this year but we have seen them in Gansbaai and False Bay. We need more comprehensive data to get a better estimate on the overall population.

What area is covered by the study and why just those areas?

Mossel Bay, False Bay and Gansbaai. We have some data from Algoa Bay but that’s a very small data set. What I would like to do to improve the methods would be to incorporate some of the telemetry that we’ve done. If we’re only sampling at those sites, our data is then limited to the areas only with no information coming from elsewhere.

Have you tried using acoustic or satellite tags?

With acoustic tags that we’ve used in the Ocean Tracking Network our range is increased and there’s also the possibility of using satellite tags, though they didn’t last as long as we’d hoped. Satellite tags would eliminate the necessity for a fixed observation site as we would get the information as soon as the shark surfaces. One of the observations with the pacific populations is that there is an offshore phase for a lot of the white sharks and we’ve also seen that here. If we’re relying on photo ID we won’t be able to get a photo far offshore. So taking an integrated approach including telemetry will broaden our data.

I understand you are using a new method to carry out your assessment; can you share a little more information about what you’re doing?

The method I want to use is relatively new. The traditional methods are mark recapture models where portion of the shark population are captured, marked and released. I’ll also be going by sight but will be sampling more often. Adding acoustic detection in will increase data capture as you are not reliant on water visibility and the shark coming close enough to observe it. The weather plays a factor but it is shown to be a better method.

Sounds like you have a lot of information to gather, who all is helping?

The people contributing to photo ID are Alison Kock from Shark Spotters in False Bay and Alison Towner from Marine Dynamics at Dyer Island. Also Matt Dicken in Algoa Bay but as his research is ending soon it will be a limited data set but a very important one as he sees a lot of the smaller sharks. It’s important we sample across the size / age range of these sharks.

Are you hoping to publish your results soon?

We have a really good set of data going back to 2001 and the tags have already been put out there as part of the OCEARCH project, so now it’s just a matter of collating it all. There is also more sampling we’re hoping to get e.g. from the larger sharks.

Do you think there might be some surprises? What is your major motivation for the project?

One of the things motivating me to do this project is that a lot of people think that white sharks are endangered. This is potentially a misguided belief, particularly if our protection measures are enough. Maybe the population numbers are stable, perhaps even recovering. Then we would know that some of the money being spent on conservation efforts for these sharks should be used for other species. I would hope to see that the population is stable and we could maybe then spend the money on a marine protected area for other species.

The International Union for the Conservation of Nature (IUNC) currently lists great white sharks as endangered. Should you discover a large population of white sharks in the study area would you expect your results to impact that classification? 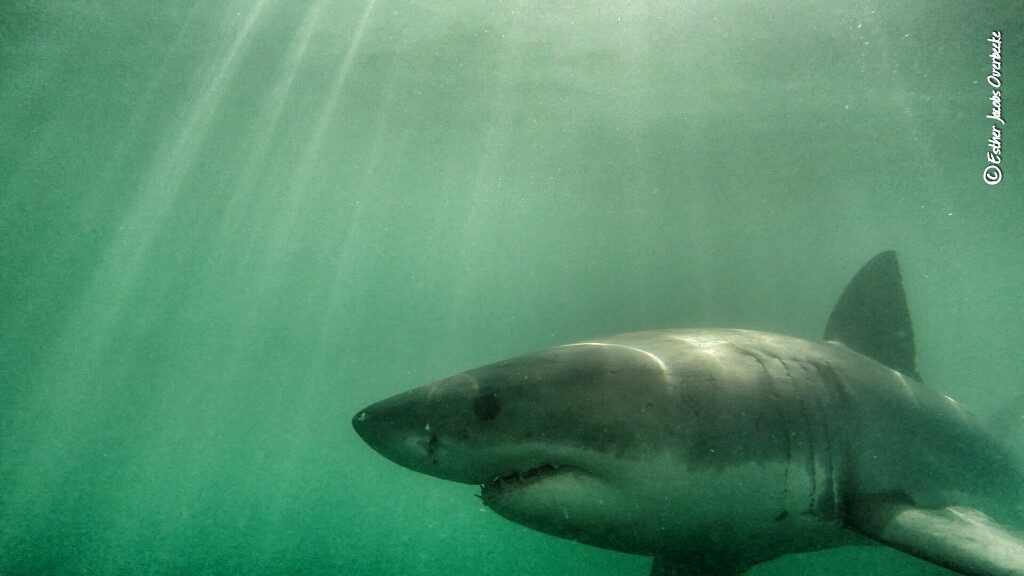 Would you expect the IUNC to change the status regionally? Would that cause more issues?

I think if we did that and had them listed in certain areas as not threatened, then it would leave these sharks vulnerable to exploitation.

You seem very positive about the population numbers. Do you expect to see a population recovery?

I’m not expecting anything. That’s just what I’d like to see. You get a lot of sharks that are more prone to exploitation, especially for their fins and meat. You don’t hear about white sharks being targeted for their fins or meat as often. I think it would be hard to catch the white sharks in big numbers to put a huge dent I their population, however they are often targeted by game fishers and that must have some negative impact [note: white sharks are protected in South Africa and it is illegal to kill or target them].

Will your results feed into any further research?

Since we’re using telemetry and the tags can transmit data for a few years, the information received could certainly be used in the future. We put out 36 internal barcode tags and they have a battery life of 10 years.

Do you think money is better spent on research or shark conservation efforts such as education?

I think that shark attacks, or negative shark/human interactions, bring a lot of negativity to the species involved. I think that some money should be used to educate water users on how to avoid negative encounters. Research is important to understand which species need to be conserved and how to carry it out. There’s a lot of debate between water users like surfers and the fishermen over shark populations… the former tend to state that they see more white sharks than previous years whereas the fishers state that they see less. It will be great to be able to say for sure how the population is doing.

On a personal note, I have known Mr. Irion since I began working with white sharks in 2011. I am really excited about his project and look forward to the results. I believe white sharks should continue to be protected regardless of  the outcome of his project, but I definitely agree that if the results show that white shark populations in South Africa are recovering, then we can concentrate conservation efforts on other, more vulnerable shark or ray species. 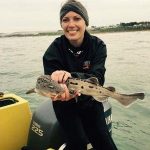 Esther Jacobs Overbeeke is a shark Conservationist and founder of Keep Fin Alive(www.facebook.com/keepfinalive). The Keep Fin Alive campaign takes a light-hearted approach to help change common misconceptions of sharks, while driving more attention to major issues including  shark overfishing, finning, shark fishing tournaments, bycatch and longlining.  She is a publishing consultant for the www.oceans-research.com