A Great White Shark that was filmed swimming in the shallows washed up dead off Coronation Beach, north of the West Australian town of Geraldton, apparently chocked to death on a sea lion.

The 13ft tagged shark had a large Australian sea lion stuck in its throat. Principal research scientist Dr Rory McAuley told Western Australia Today “Such a large object may have damaged the shark’s internal organs or impeded water flow into his gills, contributing to his death. Alternatively, the shark may have accidentally become stranded in his attempts to get rid of the obstruction.”

The shark had been tagged in January in South Australia.  Tissue samples were taken for future testing.

Tash Tapper who took the YouTube video said the shark struggled for two hours randomly beaching its self.  Bystanders attempted to help, but realized something was wrong with the shark and Mrs Tapper said “To me it seemed it was coming in to die” 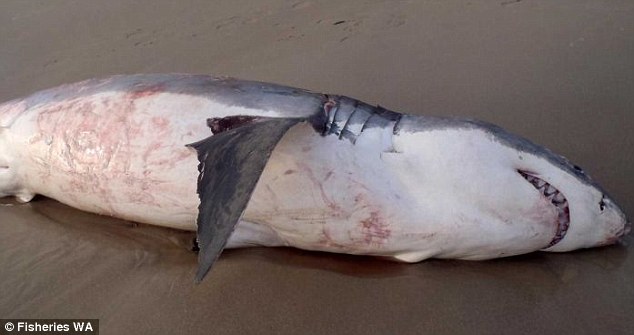 More photos of the struggle: here