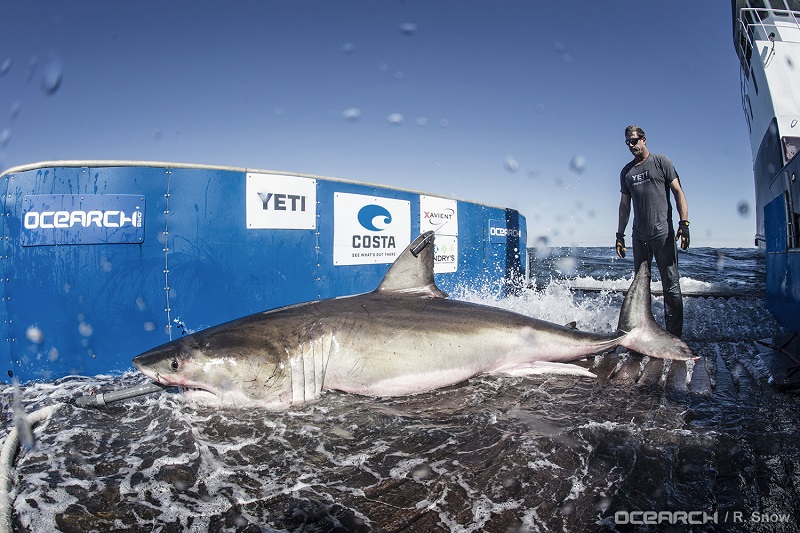 Hilton is a mature great white that weighed 1,326 pounds when tagged on March 3, 2017 off the coast of Hilton Head, South Carolina.

The male shark was caught and tagged by the nonprofit group OCEARCH during their Lowcountry Expedition. Scientists and researchers attached a Smart Position and Temperature (SPOT) Tag to Hilton’s dorsal fin.

When the tag breaks the water for 15 seconds or more, a signal is transmitted to satellites. The information is then uploaded to the group’s live shark tracker where anyone with a computer or mobile phone can track him.

Hilton has traveled 9,867 miles since being tagged, which includes his trip up the East Coast of the United States and into Canada.

He then made his way south and surfaced extremely close to the east coast of Florida off the Canaveral National Seashore on April 1.

After a 12-day swim, Hilton emerged on the other side of the state toward the western tip of Key West.

In the following days, he surfaced in Gulf waters swimming along the boundary of the West Florida Shelf.

On April 22, Hilton popped up in the Panhandle off the coast of Port St. Joe.

And, thanks to OCEARCH, we also know of one other shark that was tracked along a similar path. 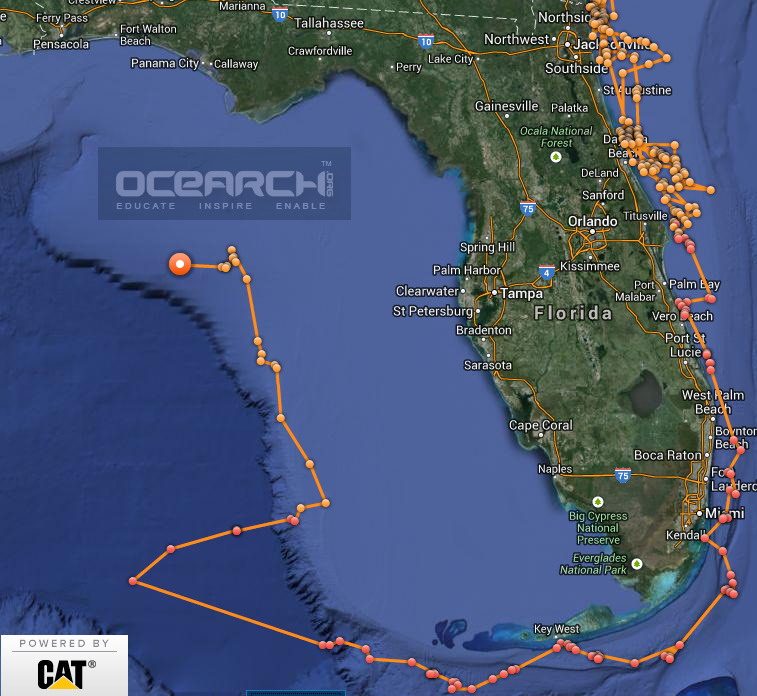 “My guess, and it’s just a guess, is that this particular white shark and probably some of its friends are in the Gulf of Mexico looking for tuna fishes. We know that the off-shore area of the Gulf of Mexico is the most important spawning site for blue fin tuna,” said George Burgess, Director Emeritus of the Florida Program for Shark Research at the Florida Museum of Natural History.

It is possible Hilton is also after tuna or other game fish? While it’s tough to be sure, the ability to live-track sharks grants us a glimpse into the lives of these predators.

OCEARCH has shared the data on the global shark tracker with 2.3 million users. Not only has the group been successful in studying sharks with over 50 research papers related to the group completed or in progress, but it has literally given a voice to sharks of all species.

Twitter accounts for OCEARCH-tagged white sharks, makos, whale sharks and even turtles have given a voice to the sea creatures.

We can only speculate what Hilton is up to, but it will be interesting to follow his path online using the shark tracker.