The video was filmed off the coast of Mexico’s Guadalupe Island, which is known for its large migrating population of great white sharks.

Diver Ming Chan from Singapore was with a group to film the sharks as they were brought near the shark cages.  To entice sharks to approach the cages, large pieces of tuna or other fish are pulled by rope in front of and around the cages.

Unfortunately for the shark in the video, the bait was dragged near a gap in the cage designed for divers inside the cage to view the sharks outside of the cage.  As it approached the cages, the shark managed to force its way through the gap and inside a cage.

Thankfully, the crew acted fast and opened the top entrance to the cage and the shark was able to work its way free. There is no way to tell how badly the shark was injured.

While this video is quite amazing, it is not the first time sharks have ended up in cages with divers. 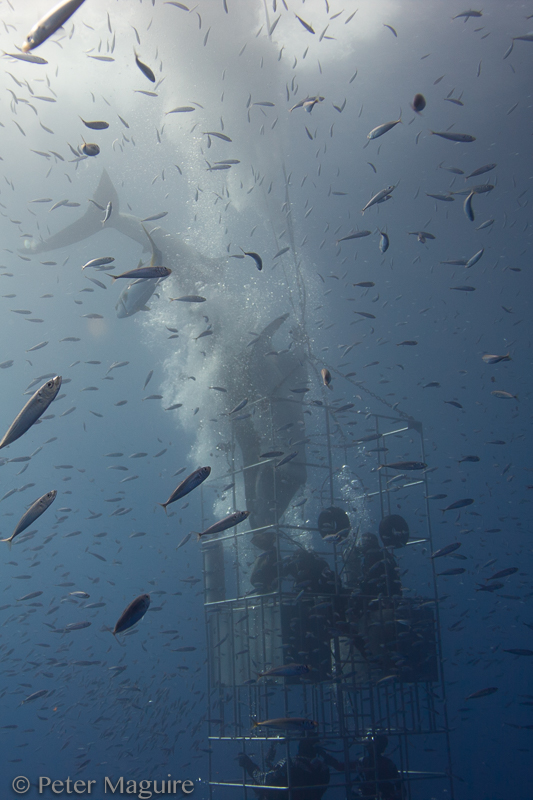 As recently as October 10, a group with Bluewater Travel had a tense moment with a great white shark. The cage and four divers were around 35 deep when they were circled by a 13- to 15-foot long female great white shark.   The shark approached the upper part of the cage, known as the balcony, and bit into the surfaced-supplied air system as it became entangled in the cage bars.

The divemaster was able to quickly turn on a reserve air system, but the shark was still mixed up in the bars.

The shark thrashed so hard, at one point, the cage was shifted to a 45 degree angle.

The divers, cage and stuck shark were all raised to the surface. The divers had to maneuver around the stuck shark to make it back onto the boat. After all the divers were back on the boat, several attempts were made to free the shark.

“The crew wasted no time trying to get the shark dislodged from the cage. After a few failed attempts, they tied a rope around her tail, lowered the cage back into the water, and tried to pull her out backward. Her gills were pressed against the cage bars, so divemaster Peter went into the cage and pressed on her gills, which freed the shark, and she swam away,” Yonker said.

In October 2015, another group off Guadalupe had a shark breach into part of their cage. Thankfully the video description says the shark and all humans were ok.