Today we finish up our interview with Dr. Ryan Kempster of Support Our Sharks. If you missed part 1,  it is still available here.

What’s unique about Mossel Bay, South Africa,  is that a lot of the time, you only have to travel 10 minutes from the harbour to find the white sharks.

The access is brilliant and the conditions are also amazing with the calm seas. We were used to the huge swells and harsh winds when being at sea in Western Australia on a tiny boat and deploying our equipment out there can be really trying. When we came here it was a luxury to have this calm bay, with a short boat ride then being surrounded by white sharks almost instantly. 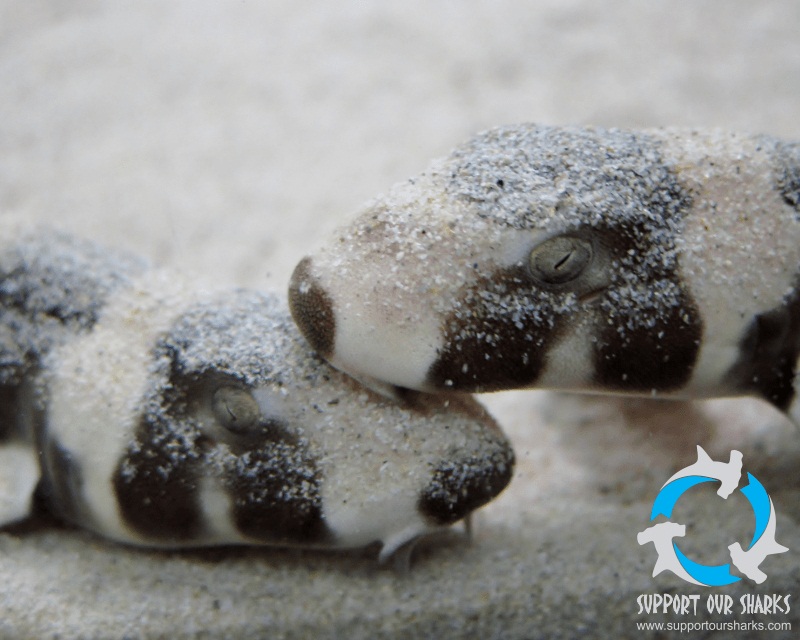 What has been your most important scientific finding?

My personal favourite and most interesting discovery was when we were working with baby bamboo sharks. Again, we were focused on the electro-sensory system. We were looking at the point during their development that they could detect electrical signals. Bamboo sharks are born in an egg case and for a period of time, they’re fully gown but bound to the egg case. So, we monitored these baby sharks while they were developing in the egg, and periodically over that time, we would stimulate them with an electrical signal to imitate a large shark. Up until a point in their development there was no reaction at all as they wouldn’t have developed the neural connections to activate the sensory system yet. Then, there was a key point when they would start to react and we were able to corroborate that through other research to show it was the point at which the neurons would connect to the sensory system. So, the behavioural side and anatomical side completely aligned. The great thing was this innate behaviour. When they sensed what they thought was a large predator, they would completely freeze and they would stop breathing.

Well, normally a reaction to a predator would be fight or flight, but since the sharks are in a little egg case, they’re best chance is to stay really still so that they won’t be noticed. There was a limit to how long they could stop breathing though. We observed the breathing patterns through their gill movements. After a minute or so of not breathing they must resume breathing, and it was interesting to observe that first breath as it was almost like a big inhalation and the gills would open really wide.

How were you able to observe this behaviour?

We had the eggs hanging in a tank and lights behind them, which would shine into the egg to show the inside, plus cameras set up to record them. The eggs were all at different stages of development.

What has been your biggest challenge?

Mainly accessing the animals. When we started we were mostly lab based and all our work would be carried out in the lab or aquarium. Then, we progressed to field work using remote cameras and different equipment, but taking what we had been doing in the aquarium and trying to do it in the field. When we first tried to do this, it took a while to get the sharks to interact with our equipment. We ended up with hours of footage of blue water and couldn’t understand why the sharks wouldn’t interact with the cameras. The sharks were very camera shy and didn’t seem to like our big equipment clanking around. So, we ended up adapting our equipment. We used to have the cameras hanging in the water with horizontal cameras, so we changed it to vertical cameras and could then have the bait held further away as the bait being too close to the cameras is what seemed to put them off. Over the years, we have developed the equipment even further and have even tried to make it quieter. We keep everything tightly bolted so nothing is clanking around. It was a learning curve, but now the equipment works really well. 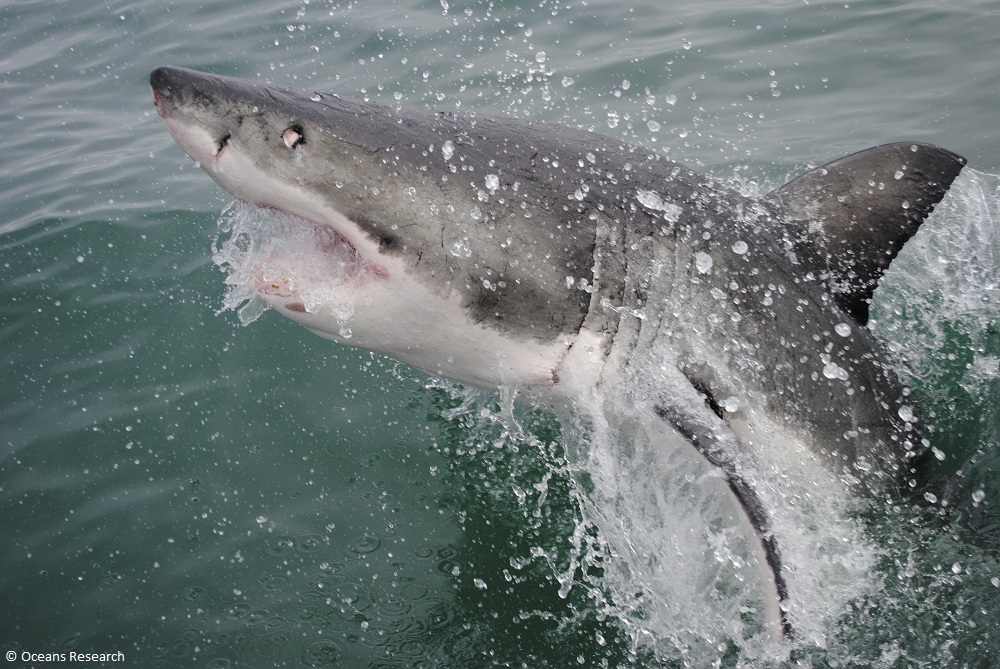 How do Oceans Research fit in with your research?

At the moment they’re integral. Not just with providing access to the white sharks, but also with all the help we get from the interns. We used to have a much larger team and the last time we were here we were testing seven different types of deterrent. We were swapping the researchers around each day to give everyone a chance in the field. After that we realized we don’t need to take the entire lab with us on a research trip. So, this time, we’re here with just three of us. Through Oceans Research we have access to many interns who are keen to be involved in interesting field studies. The interns have been great and kept us on our toes with some thought-provoking questions.

Do you hope your research will aide in shark conservation?

Yes, absolutely. Particularly, just now with the shark deterrent work. The paper we have written that will be coming out in a couple of days will certainly feed into conservation. Finally there is a deterrent on the market that has been well tested and researched, and actually works. We know that culling doesn’t work. We know that it’s not effective. We had three years of culling in Western Australia and now they’ve finally accepted that it’s an ineffective method. Now, the best thing we have is a Shark Shield. If you want to be in the water and you’re worried about sharks, take a Shark Shield. At least now people have a solution. Just saying ‘don’t go in the water’ isn’t really fair. Now we can say ‘you can go in the water, just take a Shark Shield’. I hope this deterrent will have a big impact and tone down the calls for culling sharks. Beyond that, we’re expanding into other types of deterrents. Particularly from an area-based point of view, such as trying to keep sharks away from areas like beaches.

It seems unfair that sharks always get the bad name when an incident occurs, even when the person involved in the incident was warned that sharks have been spotted in the water.

Absolutely. Some of the other research we’re looking at, that we should hopefully be able to publish later this year, is what initiates a shark attack… what makes sharks bite. One of the things we’re looking at is how do we compare to seals, as it’s often said we look like a seal in the water. Our research group developed an ‘artificial shark’s eye view’ of the world that takes in to account the resolution and acuity of a range of sharks. So, how they would view e.g. a swimmer, seal or surfer. You look at us and think how could we look like a seal? But, when we look at it from a shark’s perspective in 10 or 15 feet of water, do they start to look alike? We have students back in Perth analyzing data and they will be able to say for sure once the research is complete. If, indeed, it comes out that they do look alike, then we can take this further to improve deterrents such as using lights or maybe some kind of pattern on surfboards or wetsuits.

Say I never travel by car or plane, I’m never in a position to be around dangerous land animals, coconut trees, lightening spots or any other fatal objects compared to shark incident numbers, how dangerous are sharks?

My personal point of view isn’t that sharks aren’t dangerous. Some sharks are in fact dangerous. I would never recommend that anyone swim with a white shark or a tiger or bull shark as they are the three most dangerous. The reality is that we are not on the menu. We are the complete opposite of what a shark’s typical food source is. So, it’s likely that bites stem from a case of mistaken identity. So, in that sense, it’s probably a good idea to take precautions where possible such as proven deterrents like Shark Shield.

Why should they be protected?

Sharks have a really important role in ecosystems. They are also very diverse, which is something that’s often forgotten about. There is a whole range of sharks. People think ‘why should I protect sharks if they eat people’. There are over 500 different species of sharks that all have an integral role in different environments. In almost every marine environment you can think of, there will be at least one species of shark that plays a role in maintaining that ecosystem. So, it’s really important that we’re taking this into account when we look at marine protected areas etc. We need to understand their role in that environment, which is the same for any fish really. We need to look at what would happen if that fish or shark, and that role is removed. White sharks get a lot of the attention as they’re so charismatic. They’re usually the main shark shown on Shark Week. So everyone thinks we need to protect them, which we certainly do in many places in the world, but there are also places where they’re doing absolutely fine and need no protection at all. We just found out that the California population of white sharks are doing great so really they don’t need the money that goes towards their protection. That money can be better spent on sharks that really do need protecting. The general public can use the IUCN list to get an idea of where to help as it’s a great source for identifying species that need protecting.

That concludes our interview with Dr. Ryan Kempster of Support Our Sharks. I would like to thank Dr. Kempster for taking the time to share his insights and for all the wonderful work he does for sharks. You can visit Support Our Sharks at http://www.supportoursharks.com/They can also be found on Twitter @supportourshark and Facebook.com/supportoursharks. For more information on Oceans Research and their education programs check out www.oceans-research.com

2 Thoughts to “Interview with Dr. Ryan Kempster of Support Our Sharks Pt 2”