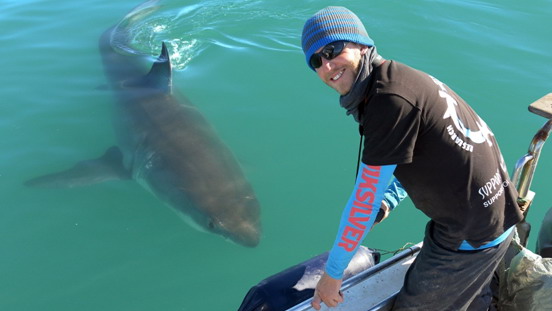 Today I have the honor of sharing my interview with Dr. Ryan Kempster founder of the non-profit organisation Support Our Sharks (SOS). Dr. Kempster is a shark biologist who obtained his B.Sc. (2005) and M.Sc. (2007) in marine biology in the UK, and went on to complete a Ph.D. at the University of Western Australia (UWA) in the sensory biology of sharks. He recently spent a month with Oceans Research working on his shark deterrent project.

Let’s start off with a little background. Do you consider yourself more of a biologist or a conservationist?

I like to think that everything I do as a scientist has a conservation purpose. Sometimes it’s quite a long route to where the conservation benefits come in, but they’re there. The work we do is neuroscience focused, such as the shark’s sensory system, so at the moment we are working on shark deterrents. Shark deterrents have big benefits for conservation, as opposed to something like shark culling.  It’s hard for people to appreciate how understanding the biology of these animals relates to conservation, but there’s a path there that leads to conservation and we need to have that basic understanding to get there.

So do you consider yourself a conservation biologist?

I like to think that everything I do as a scientist has a conservation purpose. Sometimes it’s quite a long route to where the conservation benefits come in, but they’re there. The work we do is neuroscience focused, such as the shark’s sensory system, so at the moment we are working on shark deterrents. Shark deterrents have big benefits for conservation, as opposed to something like shark culling.  It’s hard for people to appreciate how understanding the biology of these animals relates to conservation, but there’s a path there that leads to conservation and we need to have that basic understanding to get there.

What is the main goal of your non-profit, Support Our Sharks?

Support Our Sharks is a combination of sharing my research, educating people, and with that, bringing about conservation and change. So, really, it’s about bringing together an elective of people who have the power to make those changes. This has been great in Western Australia with all the shark related issues we’ve seen. Having the backing of so many people in the group really helps us to push the petitions and bring about changes in legislations. Really, we’re trying to reach as large an audience as possible with genuinely good information that has a basis in research and science, rather than the typical media hype about killer sharks. It fa8cilitates more research and gives people the opportunity to support that research.

So the information you give to people is as factual as possible?

Yes. A lot of the information comes from my own personal experience through the research I’m doing. Or through my own reading and learning and I share what I think is relevant. It’s a way of facilitating all of the knowledge I’ve learned about sharks over the years and sharing it with others.

I see you’ve created videos that cater to kids. Are they your main target audience?

My audience is more general. If you look at the statistics on who accesses the social media pages, there’s a very broad range of people. Certainly, in Perth, we do a lot of school visits, so that brought about creating these videos. When I first started the talks, I had no content to show them. It became apparent that I needed visuals… something for the kids to engage with. I’ve always had an interest in animation so that’s why I chose to make the videos.

I love the Why Shark’s Matter video, as does my 3 year old. I use it at my own school talks and the audience love it.

I’ve noticed that although it seems targeted at kids, it works really well for adults too. I have that same philosophy when I present at a scientific conference. You talk to these old dog scientists who tell you to get all the data and stats in your presentation, but you realise that all people want is a really simple approach to how you’ve done things. They want to sit back. They don’t want to have to think too hard and almost want to be spoon fed the information. I find that with the animations, the adults also love that stuff.

Have you used the same animations at the conferences?

Not those ones specifically, but other versions of them. In fact when we came to Mossel Bay a couple of years ago, we first went to Durban for the Sharks International Conference. My entire presentation was made as an animation. I got some great feedback. Some of the older scientists mentioned they didn’t think it was the way we should do things, but I think people appreciate something that’s engaging.

What’s your favourite species of shark?

This has changed a couple of times over the years. The first shark I ever saw while diving was a leopard shark, or zebra shark depending on where you are in the world. I was just fascinated. The shark just sat on the bottom, not moving, and was so chilled out. I managed to get right up to it and it wasn’t bothered. That got me really interested in learning more about sharks. When I started my Ph.D. in Australia, I worked with Port Jackson sharks. They’re adorable and quite different from other species with they’re boxy heads and spines. We had a facility where we were working with baby Port Jackson sharks and that’s when I feel I love with them.

What do you think of the epaulette (carpet Sharks)? They look so interesting.

We’ve actually done some work with epaulette sharks and they’re amazing, but a bit tricky to handle. They have long, slender bodies, but are incredibly strong. When you need to handle them, they’ll completely coil up so it makes behavioural work a bit difficult. They’re great sharks though, really beautiful and I love how they can walk on the ocean bed and come out of the water.

Have you worked with the benthic sharks we have in Mossel Bay?

No I haven’t, but I do love your pyjama sharks.

When we work with the benthics like the leopard catsharks and sometimes the pyjamas, they often coil up like the epaulette, making it difficult to measure them.

I’d love to do some work with them. Hopefully there’s potential to come out here with some students in the future to study them.

There doesn’t seem to be a lot known about the benthics from a conservation standpoint.

They don’t get the attention of the big, charismatic sharks like the white sharks.

What can you tell us about your past and / or current research?

All of my research on sharks has been focused on the sensory biology. I started looking at the electro-sensory system. At the very beginning it was from a morphological point of view… gross anatomy like the pores for ampullae of lorenzini and how that differentiates between species. I did a large study in the beginning with over a hundred different species of sharks and rays where we compared the arrangement of the pores. We tried to understand what that meant for feeding behaviour. We came to some conclusions, but now we’ve started to dive a bit deeper to discover how the species differ in terms of the connection to the brain. This has naturally evolved into the shark deterrent work we are currently doing. A lot of the deterrents work on the electro sensory system, like Shark Shield and Surf Safe. However no one’s actually looked at how the sensory system works. We know it helps them with feeding and that they can detect electrical fields, so there are papers on that. But there’s a middle ground to say that we have this technology that seems to deter them, but how does it actually work? That’s now where our research is going, to better understand the technology currently available and to see how it works. Also, to develop some novel technology, so new devices that would not only work on the electro-sensory system, but other senses as well. Most of the research we’ve done in Mossel Bay is with deterrents and we’ve looked at a range of electro-sensory deterrents, plus visual deterrents using lights and strobe lights, and even sounds and smells. We’ve focused on white sharks as this is the top species involved in fatal attacks. If we can find a suitable deterrent for a white shark you’re pretty much covered. Most attacks by other species are not fatal.

Do you find that when testing deterrents on e.g. a white shark here and a tiger shark in Australia, that the response is the same?

No, there’s definitely differences between the species. In the case of electro-sensory deterrents anyway. When you look at the number of electro-sensory pores on a white shark, it’s around 700. A tiger shark has around 1,000 and a hammerhead has around 3,000. You can imagine that such huge differences in the number of pores in the system means that surely they must use the system differently. There’s a whole range of other differences that separate the species. On the limited research we’ve done on a number of different species, hammerheads, tigers, white sharks and a bunch of reef species, they certainly respond in different ways. One deterrent we’ve had particular success with is the shark shield. We’ve just published research that will come out in the next couple of days and that’s shown great success with the white sharks and also great potential with the other species. We have observed notable differences in the way the different sharks approach Shark Shield, how long they stay around etc. It will be good to finalise the data on the other species to see these differences in a research paper.

Yes, so much to look at and so much data to process. But we’re getting there.

Is there a reason you pick Mossel Bay for some of the aspects of your research as opposed to other known white shark areas of the world?

Australia is known to have white sharks, especially South Australia. There seems to be a disconnect between how many sharks there are and how many that people think there are. In Australia, they are spread far apart. You may get them all along the Southern coast, but not in a concentrated area. We initially tried to do our research in Australia, and with the tiger sharks and reef sharks it was great, we found those no problem… well it took us a long time to find them, but we got the numbers we needed. Then, we went down to South-West Western Australia and in four days, we only got one white shark who just passed by briefly. We had known Enrico [Enrico Gennari, Director of Research for Oceans Research] for a while and he was a bit shocked when we explained our lack of white shark encounters, telling us how he was sometimes seeing 10 to 20 a day within 10 minutes of anchoring the boat. So, we came here two years ago and couldn’t believe the activity. For our data purposes, we got what we needed in just a couple of weeks.

3 Thoughts to “Interview with Dr. Ryan Kempster of Support Our Sharks Pt1.”