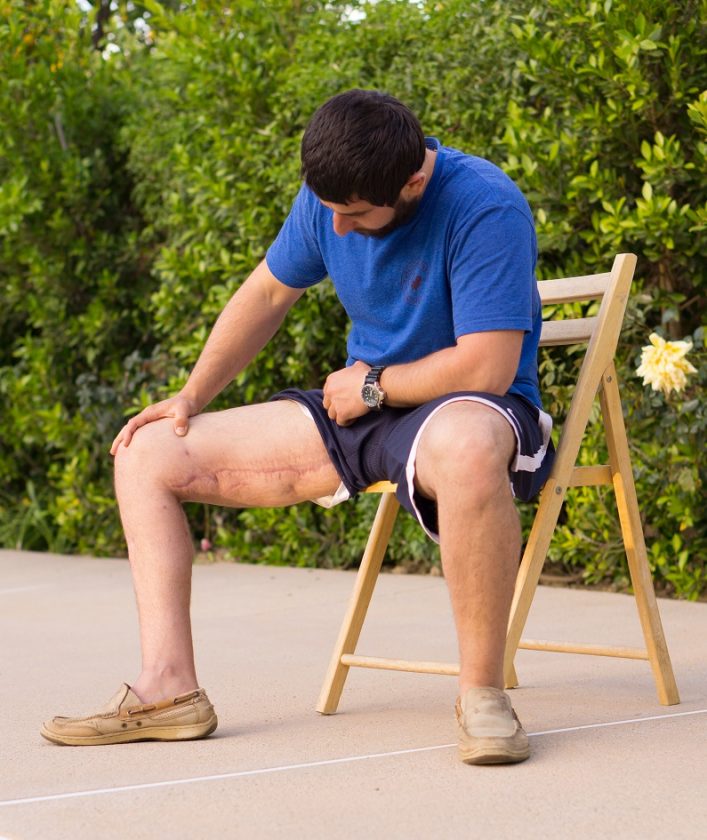 Under a slightly overcast sky on November 24, 2017 Grigor Azatian and his father Armen were diving off the coast of Pebble Beach when he was bitten by a great white shark.

The 25-year-old and his father had fished the area before, and Grigor, who had been spearing for 12-years and diving even longer, had just taken a couple of fish.

His father wasn’t having much luck, but Grigor knew there were more fish in the area and suggested his father go back down.

While floating at the surface Grigor decided to grab his camera.

“I was in the water with the camera for about 20 minutes taking pictures here and there,” he said. “I decided to take my camera back to the boat and grab my gun to search for a different species of fish.”

He grabbed his speargun around 1:30 p.m. and went on the hunt. He didn’t see anything on the bottom and came back to the surface.

“I took my second dive, diving down to about 40 to 44 feet and it was toward the end of my dive and I was going to head back up,” he said.

As the computer science major was heading up, he looked around to see if he could spot more fish.

“I looked to my right and didn’t see anything and then I looked to the left and that is when I saw the shark.  It was maybe 30 to 40 feet away.”

“When I first saw the shark, I got excited. Yes, I was also a bit on edge but I thought to myself, finally, after years and years of diving off California’s coast, I had finally seen one of the biggest and baddest predators of the ocean.”

The underwater visibility was good, but he could only see around 40- to 50-feet and the shark was almost out of sight.

“It turned to the right and swam into the depths and I lost track of it.”

Grigor continued to surface and managed to stay calm as he ascended.

“I didn’t panic, I swam slowly and tilted to the right to be closer to the boat as I surfaced.  I kept looking [for the shark] and swam up and toward the boat,” he recalled.

He was worried about his father and once his head broke the surface, he started looking for him. He had no idea the shark had stayed out of sight and was closing in.

“My head was out of the water, so I didn’t see it approaching me when I was on the surface.

“It came from my right side, turned to the right and bit my right leg and, as it bit my right leg, turned me over onto my back. I was on my back while it was biting down and shaking me.

“My hands were swinging left and right. I must have hit it with my left hand somehow as I have a wound.”

The avid diver had no control during the few seconds the shark was biting his leg.  Thankfully, the estimated 16- to 17-foot shark released its grip.

“It let me go and I was swimming as fast as I could, yelling for my dad,” he said. He was able to make it onto the boat and started looking for the spot where his father was diving.

“I saw him [his father] swimming and I said, okay, I am just going to lay down. I put my left leg up but I couldn’t move my right leg.”

Once his father, who is a doctor, was back on board, he attempted to stem the bleeding.

“He tried to fashion a tourniquet from a boat line, but he saw that it’s not bleeding profusely, so there’s no major artery cut. There is a lot of blood on the boat, but it’s not continually bleeding.”

Once Armen realized the bleeding wasn’t profuse, he tried to alert authorities, but neither diver’s cell phone nor the VHF radio would function properly.  Armon cut the anchor line and the pair headed into Still Water Cove.

“We got to a short pier and he [Armen] yelled at some fisherman to call 911, but apparently someone had already called.” 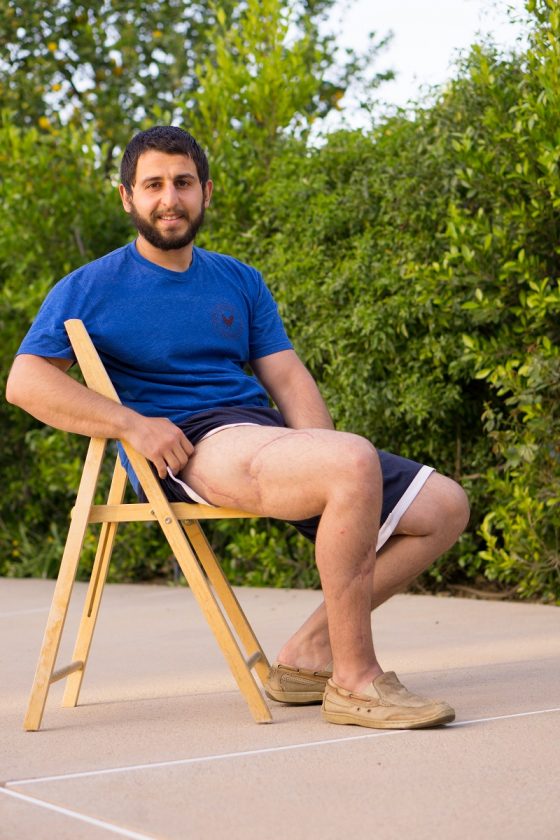 A man painting a house had witnessed Grigor’s screams and alerted emergency services. Two off-duty sheriff’s deputies, who were already in the area, heard the commotion and met the Azatians on the beach. A deputy was able to obtain a tourniquet from a responding officer, who grabbed a first aid kit and ran to the beach.

Based on photographs of his wounds, it appears the shark bit down at least twice.

“There’s more than one bite. My outer thigh was bitten pretty badly and my inner thigh, my calf and shin. It may have bitten down two or three times,” he said.

It appears the shark’s teeth may have also been deflected by a piece of the diver’s lead weight. A striation in the lead shows a tooth mark where the shark’s mouth was deflected.

Thankfully, Grigor has healed and is walking without crutches.  During his recovery time, he has had time to reflect on the encounter.

“I don’t blame the shark for the attack; they don’t have hands, so their only way of trying out new foods is to nibble at them.

“If I could go back and do one thing differently, I would keep my face in the water and my eyes peeled. When the shark turned and swam off I really didn’t think it would come back, so I let my guard down.

“I surfaced, stuck my head out of the water, and yelled out to warn my dad of the sighting; that was my priority at the moment.

While the selfless act of trying to warn his father of danger may have contributed to his attack. The medical student hasn’t forgotten the people who came to his aid and wanted to make sure they knew how much he appreciated them.

“First and foremost, I would like to thank my father for saving my life. Amidst all the blood and gore, he showed no signs of panic as he quickly and safely transported me back to shore and into the helping hands of the off-duty sheriff’s officers and first responders.

“I would like to thank the man who saw the whole ordeal from the cliffside and decided to dial 911. Because of him, the first responders were at my side within 5 minutes of our boat hitting the beach.

“A huge thank you to the many medical professionals involved in my care for helping me get back on my own two feet. One of the most frustrating aspects of my recovery has been not having the ability to perform everyday tasks I had taken for granted, so I would like to thank my mom for being there for me 24/7 during the worst of it, helping me out any way possible.

“A thank you goes out to my girlfriend for being at my side since day one; frankly, I cannot imagine how much harder the past few months would have been without her love and support.

“Lastly, I would like to thank all my family, friends and everybody else around the world who reached out, for keeping me in their thoughts.”

There were ten shark interactions off the coast of California in 2017. Six involved kayakers, one boat and three attack/bites. The two most serious bites were Grigor’s and Leeann Ericson.

Locations have been marked on the 2018 Shark Attack Bites Tracking Map.