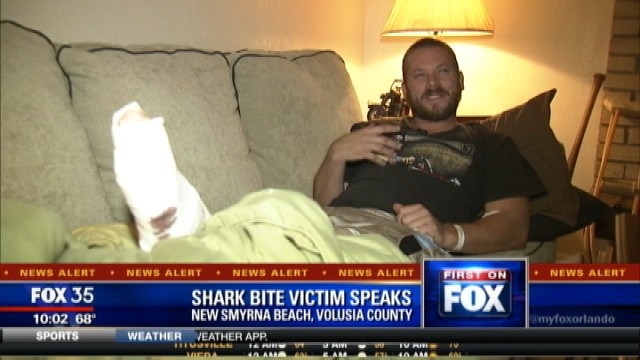 Kevin Ross, 29,  was bitten on his his left foot by a shark off New Smyrna Beach, Florida.

Around 11:30 a.m. he was paddling back to shore when he ran into bait fish.

“I started paddling back and I had a wave push me back in a little bit, and when I got in, it was flayed open.”

“I never, ever, thought I’d be attacked by a shark,” Ross told Myfox 35 . “When it grabbed me, I was like ‘Oh my God, I’m going to die! This shark is about to eat me in the water!’ I was just trying to paddle and get back to shore as fast as I could, and I kept looking back to see if it was going to come back and get me.”

Once he made it back to the beach, he looked at the wound and realized his foot was flayed open.

Doctors used 30 stitches to sew up the wound on his foot, which he thinks was caused by a 4-foot-long blacktip shark.

Another shark bite was reported on the same day around a mile to the south.

An abundance of bait fish and choppy water could be to blame.

Click to see this and all 2014 shark bites/attack mapped out.