A female kayaker has been attacked by a shark in Hawaii. 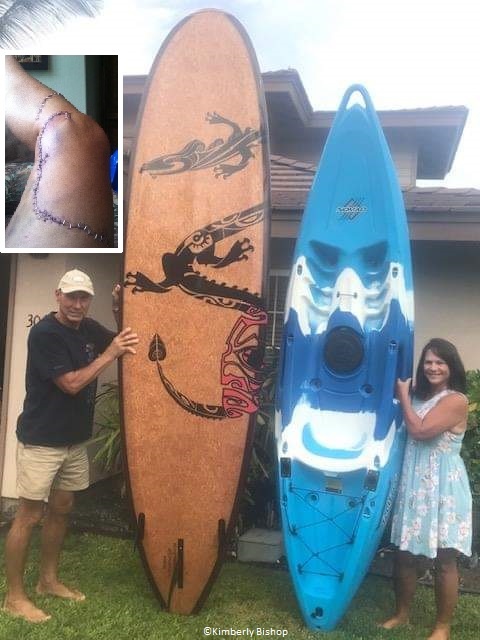 Kimberly Bishop, 65, was kayaking April 23 with her husband Kim, who was paddleboarding in Anaehoomalu Bay, Hawaii.

“The water was crystal clear, and you could see all the way down to the bottom,” Kimberly told Tracking Sharks. “Since it was so clear I wanted to get some nice pictures of the coral and the reef fish that were starting to show up again.”

While floating above a reef ledge that dropped from 10 to 20-feet deep, she placed her paddle across the boat without disturbing the water, leaned over the right side of her kayak and began taking photos with her iPhone around 8:15 a.m.

Bumped from behind, she was thrown into the water. “It was like I had been hit by a truck. It was just a boom to my kayak. Almost immediately I felt the (shark) chomp on my leg,” she said, explaining that she only felt one bite and no shaking.

“I wasn’t sure if it was going to come back. I thought it would since I was bleeding in the water, and I began yelling to my husband.”

Because Kim was more than 100 feet away, she knew she needed to get out of the water. She attempted to climb onto the top of the kayak but it had capsized. Thinking quickly, she slid back into the water and flipped the boat over and pulled herself inside.

Kim had heard the commotion and turned just as his wife was thrown into the water. He could see his wife as well as what he estimated was a 12-inch dark dorsal fin sticking out of the water.

“It was a big shark,” he said. Kim paddled to his wife and at first did not see her injury. However, once he spotted the inside of her right leg, he saw the half-moon wound.

Kimberly grabbed the back of Kim’s paddleboard leash as they headed back to shore. Thankfully, a group of outrigger canoes from the Waikoloa Canoe Club were close and the Bishops’ were able to flag them down. The group helped them paddle the half-mile to the beach, while one of the canoers used a cell phone to alert EMS.

Kimberly was taken by helicopter to North Hawaii Community Hospital in Waimea. She received internal and external sutures and 70 staples to close the flesh wound. Amazingly, there was no nerve or muscle damage and she was able to walk on her leg after surgery.

Once the couple returned home, they went down to the beach and looked at the spot where the shark attack occurred. Kimberly dipped her toes in the water as they watched the sunset. The incident will not keep the couple out of the water.

“That’s their home and we need to protect them,” she said when asked about how she feels about sharks. “It’s their habitat and unless there is one that is deranged or something that’s coming right into shore and a hazard to kids, I don’t think we should mess with them.”

Her husband believes the same thing.

“There have been occasional shark attacks here. So, we are aware of them and I watch for them all the time,” he said. Mentioning that about ten minutes before the shark attack occurred, he thought of how rare an incident is and that you are more likely to be struck by lightning than be attacked.

The coupe will continue to be shark smart and avoid going out when the water is murky and avoid areas where fresh and salt water meet.

Based on the 12-inch bite wound, it is thought the shark involved was 7 or 8-feetlong and could have been a tiger shark. It may be possible that the shark attacked the kayak, but bit Bishop in defense as she may have fell on top of it.

A second shark attack occurred March 27 near the area where Kimberly was attacked.

Michael Bernstone was on his outrigger when a shark hit his canoe and knocked him into the water. While he did sustain an injury, it appears it was caused by something other than a shark.

There have been a total of 24 shark attack bites (22 with injury, 6 of which are considered provoked*) publicly reported and verified in 2019.

One fatal**; twelve were reported in the U.S (including zero fatal), with 6 occurring in Florida (2 provoked) and 5 in Hawaii (0 provoked). Six have been reported in Australia, zero fatal. Four unconfirmed bites, worldwide, not included in the total count.
*Provoked defined as spearfishing, feeding sharks, fishing, etc. (listed with green marker).
**Three possible scavenge