Two shark bites occurring in June have come to light.

Jonathan Hernandez was out for a day of spearfishing with friends June 21, when things went horribly wrong.

When the professional fisherman and boat captain surfaced from his dive off Abaco Island in the Bahamas with a freshly speared hogfish, he waved the boat and patiently floated on the surface waiting for pick up.

Out of nowhere, he was rammed by a shark.

“I was stuck from behind so hard I thought the boat ran me over,” he posted on  Facebook. He said he looked to his left and a shark was “right in my face.”

Hernandez was able to fight off the shark and began swimming toward the boat, even as he could see part of his left calf torn open in the water. 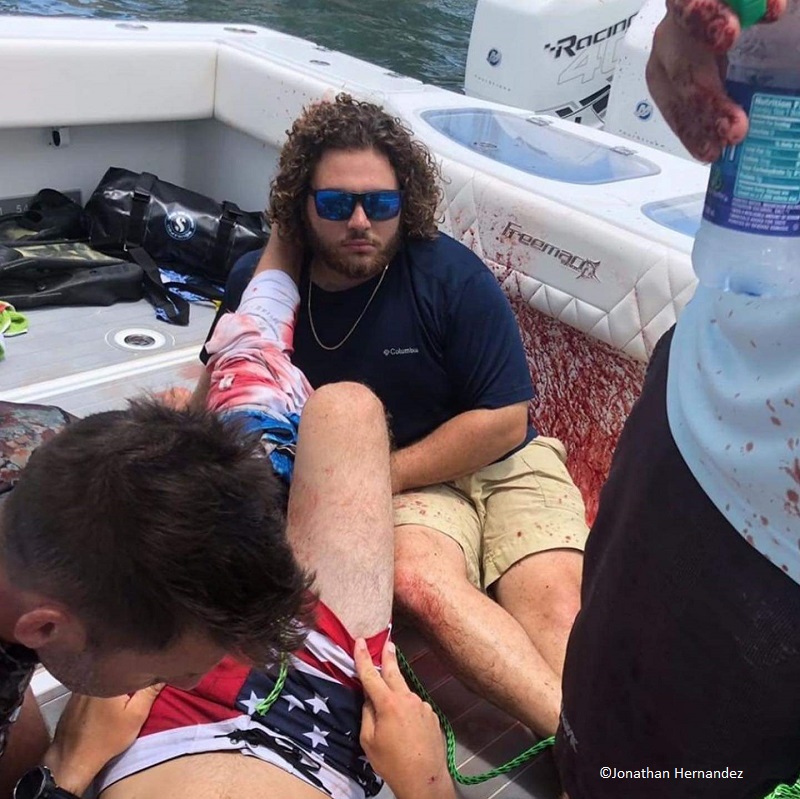 Within 60 to 90 seconds of the attack he was back on the boat and the crew applied makeshift tourniquets from diving weight belts to stem the bleeding.

“A calm crew, quick reaction and an immediate tourniquet saved my life,” he said.

Doctors sutured multiple lacerations across his calf; he will be on crutches as his leg heals.

Hernandez isn’t sharing his story to be in the limelight. Instead, he wants to remind other ocean users of the importance of having proper medical equipment available, along with knowledge of how to use it, as well as having safety protocols in place before venturing out.

“Take the extra 10 minutes before each trip to brief everyone onboard where your safety gear is and how to use what you have available,” he said. “Be prepared and educated; you never know when it could save you or your dive buddies life.”

He thinks shark feeding may be responsible for sharks associating humans with food and may have contributed to both his encounter and the recent fatal attack on Jordan Lindsey.

Lindsey was attacked by a large tiger shark while snorkeling off Nassau June 26.

The 21-year-old was with her family and a group of others when a shark was spotted.

Her family yelled to warn her of the shark, but it was too late and the shark bit her legs, buttocks, left arm and severed her right arm.

In Florida, a shark bite was reported June 30.

An 18-year-old surfer was bitten on the foot by a shark at New Smyrna Beach Inlet. The unidentified man from Merritt Island reported the bite around 4:30 p.m.

His wounds consisted of minor lacerations, and he was not taken to the hospital.

Five fatal**; 21 were reported in the U.S. (including one fatal), with 7 occurring in Florida (3 provoked),  7 in Hawaii (1 provoked,1 fatal) and 2 in California (1 no injury). Seven have been reported in Australia, zero fatal. Four unconfirmed bites, worldwide, not included in the total count.
*Provoked defined as spearfishing, feeding sharks, fishing, etc. (listed with green marker).
**not including one possible scavenge