A spearfisherman was bitten by a shark in remote waters off the Northern Territory, Australia. 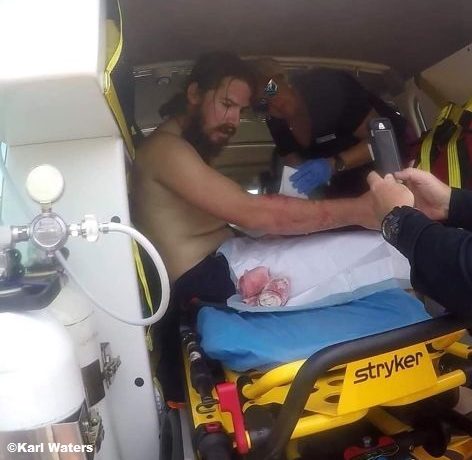 Karl Waters and a friend went for a dive around 7 miles off Alyangula Feb 10. Around noon, the 25-year-old was approached by a whitetip reef shark that grabbed his right arm.

Waters quickly surrendered the shark’s target, a freshly speared fish, and assessed the damage to his arm.

“I could see that he hadn’t hit any of the main arteries or anything on the inside of the arm, so I sort of relaxed a little bit straight away then,” he told ABC News. “I gave my hand a little bit of a wiggle, made sure that he hadn’t severed any tendons, and shouted out nice and loud to my mate who was in the boat at the time.”

Waters swam back to the boat as his friend prepared to disembark.

Once he was back in the boat, they wrapped up the wound and tried to stop the bleeding.

Because of their remote location, they used a radio to contact other boats until they could find someone who had phone reception.

Thankfully, another boat had a satellite phone and could contact emergency personnel.

Umbakumba health clinic personnel met the duo at the boat dock around 1 p.m., and Waters was flown by CareFlight aircraft to Darwin hospital.

“He had some deep lacerations that just needed to be looked at Royal Darwin Hospital,” Northern operations manager Jodie Mills said.

“We brought him through and, thanks to the quick aid of his friends undertaking first aid at the scene and also the Umbakumba nurses who met the young man at the boat ramp, it was not nearly as bad as it perhaps could’ve been,” she said.  “He’s very lucky.”

Waters is no worse for the wear and plans on getting back in the water as soon as possible.

“Every now and again you have an incident like this where they’re trying to get the fish, and you’ve got the fish a little bit too close to yourself, and they accidentally get a hold of you instead of the fish,” he said.

“I’d be happy to jump back in tomorrow and go and retrieve the gun I had to leave behind.”

There have been a total of 8 shark attack bites (6 with injury, 3 of which are considered provoked*) publicly reported and verified in 2019. One fatal**;