John Petty a 63-year-old Chiropractor from Longview, Texas went missing Sunday while shark diving in the Bahamas. It is presumed he is the victim of a shark attack.

A family spokesperson issued the following statement on Facebook:

“The family would like to thank everyone for the overwhelming support and prayers on behalf of John Petty. The U.S. Coast Guard has ceased its search as of 11:00 a.m. today. After the Bahamian Government studied the items recovered in numerous searches, it has been determined that a shark attack was the cause. A memorial service is being planned and details will be posted later today.”

Mr. Petty was diving with eight other divers on a  dive (possibly at night) with Jim Abernathy’s Scuba Adventures. The group had been diving on Tiger Beach which is located 20 miles off Grand Bahamas’ West End. A place known for its beautiful Tiger sharks.

“John was separated from the boat about 6:30 on Sunday. We are not really sure why. We do know that there was a current,” adding “When the crew realized he was not at the boat, they recalled the divers and initiated the search. Our protocol is 10 minutes. After that we contacted the Coast Guard and at that point the Coast Guard takes over,” Michael Stroscheim, who manages Jim Abernethy’s Scuba Adventures (JASA), told News-Journal.com.

This is the fourth fatal incident of 2014.

The Coast Guard found a camera, mask and other diving gear that is presumed to have belonged to Mr. Petty, who was an avid photographer. It is possible Mr. Petty died of another cause and was scavenged by sharks.

Jim Abernathy, who is well known in the shark diving community, was bitten by a lemon shark in 2011. In 2008, one of Abernethy’s clients, Markus Groh was killed after a he was bitten by a shark (presumed Bull shark) in the Bahamas. 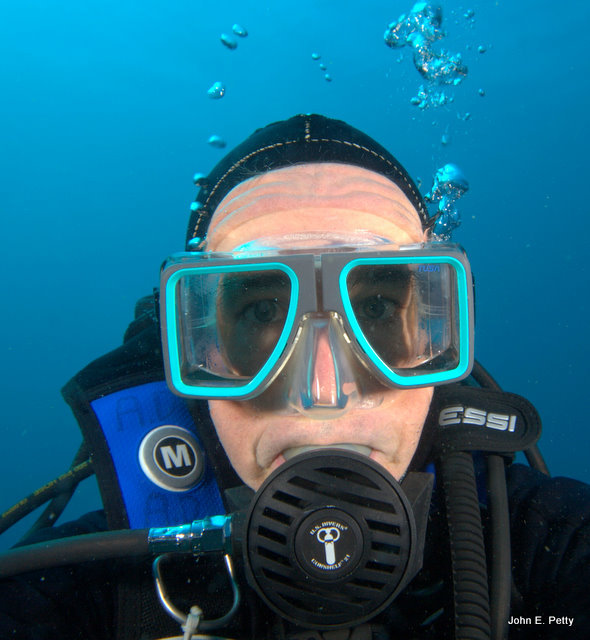 Michael Stroschim, manager of JASA, believes that Dr. Petty may have drowned, even though his recovered dive gear was bitten by sharks. He claims the buckles on Dr Petty’s dive gear were found undone.

“The evidence does not point to a shark attack in this case,” he said. “The diver most likely was separated underwater in a current, and we believe he probably ran out of air because of the way the gear was found, and then was disoriented and unable to get back to the boat – and most likely it is a drowning incident,” Stroschim told Tribune242.

“The most important thing with the dive gear is that the buckles were unbuckled – a shark can’t do that. We believe that, of course, it was not a shark attack as there are many factors pointing it was not.”

Editors note:  Most open water course require 5 dives, three confined and two open water. Advanced certification only requires 5  dives two of which must be deep diving and Navigation.  The other three can be in fish Identification, photography , night, etc.  Dr.Petty had only received his advanced certification earlier this year. Since I do not know how many dives he actually had, I can only speculate that it is possible he may have been diving above his experience level.

In addition, Tiger Beach is known to have a strong current and divers have been known to ditch their gear in order to reduce drag on a swim to a boat. Tiger sharks have also been known to bite everything, including cameras and dive gear.

It is not uncommon for someone to panic and drop their gear or shoot to the surface (a no-no in most cases).  There are also cases where divers have drowned with air still left in their tanks.  Had he become separated from the group, in the dark and knowing that there were sharks all around one could imagine the panic one would feel.