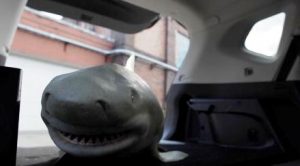 It  is a promo for shark week.
The video is a first step in a multi-stage marketing campaign for the Nissan Rogue.
Thanks to User LMC for the update!! 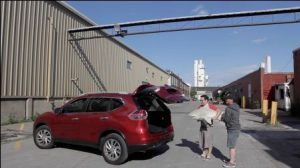 “The campaign was developed for Nissan by Bell Media’s Brand Partnership team and in collaboration with Nissan’s marketing partners, OMD and TBWA. Dubbed “In Search of Canada’s Rogue Shark,” it covers the rugged Canadian terrain – in a Nissan Rogue, of course >from the Pacific to the Atlantic, from the Bay of Fundy to the St. Lawrence – and even the Great Lakes – to understand these amazing fish and create awareness for the Canadian shark population…if it does indeed exist here.”  discovery.ca/rogueshark, launching July 28

So is this a shark or just a big catfish in Lake Ontario? At some points I thought it was a shark, other times it looks like a catfish. So I decided to ask our friend Melissa C. Márquez from sarasotafins.weebly.com to take a look. This is what she had to say: 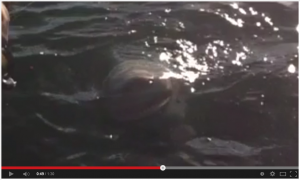 At the 0:49 mark, you can see what looks to be teeth. They seem to be pretty triangular, and very similar to bull shark teeth.

Catfish, on the other hand, lack such prominent teeth.

Many claim this to be a big teleost fish, or even a catfish, which can get to large sizes (list of other fish in Lake Ontario). 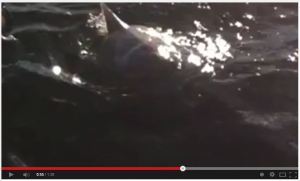 At the 0:55 mark, we get to see the dorsal fin, which looks pretty triangular, different from the channel catfish that many claim this might be. 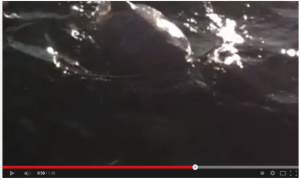 Many say this is a catfish due to the “barbels” you see at the 0:59 mark, but to me they just look like ripples of the water as the animal dives back down.

Unfortunately, the only way to be 100% sure is to catch it, or for it to have been caught. In my professional opinion, I believe it to be a small bull shark.

So thanks to Ms. Márquez, the debate has been solved.  What we are seeing is more than likely a small bull shark.  Agree or disagree, let us know why in the comments.

Also be sure to visit Melissa at sarasotafins.weebly.com

Read her previous article on Great White Shark Katharine https://www.trackingsharks.com/katharine-great/
*update*
Thanks to GreatLakesSailor for pointing out the link to Bull Sharks in St.Lawrence was erroneous.
*update 2, 7/14/14*
In 1937 Herbert Cope and Dudge Collins caught a bull shark in Alton IL.
In addition a bull shark was found in a land locked pond in Florida in June of 2014 . https://www.trackingsharks.com/bull-shark-found-landlocked-pond/
Keep in mind this article was not to written to create a panic or frighten anyone. Melissa and I both love and respect sharks and hope to share this with our readers. If you live near Lake Ontario, please do not let this keep you out of the water.
*update 3, 7/15/14*
Christopher Bird from http://sharkdevocean.wordpress.com/ speculates that it seems to wide/short to be a bull (although juveniles are more stout) and to compare the movements of the bull shark in the video below. He agrees that without seeing the actual fish, there’s no way to be certain and suggested it could also be a model prop prank.