A snorkeler has been bitten by a 13-foot-long shark in the Galapagos Island of Santé Fe. 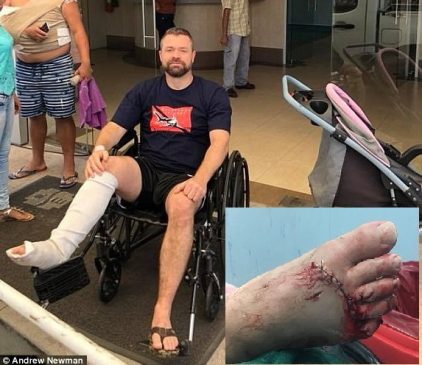 Andrew Phipps Newman traveled to the archipelago to renew his faith after the passing of his husband Damon in 2016.

The 45-year-old was on his last group-snorkeling excursion of his holiday February 2 and was heading to film sea lions with his GoPro camera.

“We saw small sharks on the bottom and lots of sea lion pups and a turtle; all 16 of us got into two dinghies and our leader said this is your last activity of the whole holiday, so we went back to the start to film more sea lion pups. But when we got there, the dad was barking away like an alarm, so I don’t know if he had seen the shark,” he told the Daily Star.

He approached a sea lion sitting on a rock when he felt a “huge Force” grab his right leg.

“Within a minute of being in the water as I swam to the rocks there was this clamp like vice around my foot. I immediately thought it was a friend having a joke because I had spent a lot of time grabbing other people’s feet as a joke and I thought they were getting me back,” he said.

Then he turned to see the estimated 13-foot-long Galapagos shark.

“His eyes were no more than a metre away from me – this massive shark head with white eyes,” he told the Standard. “We were just staring at each other with my whole foot in its mouth. He wouldn’t let go.”

Having a long-term fear of sharks after watching films like “The Beach” and “Jaws”, he had already planned a response to such an event. Feeling no pain from the initial bite, he began to fight.

“I punched him, Go Pro in hand, harder and harder until he let go,” he said. “I just went into automatic mode.”

After punching the shark three or four times, it released its grip and Newman swam to the rocks. Fellow traveler Audrey Lagauche pushed him up on the rock and out of the water.

“Half of my foot looked like it was hanging off,” he said. “I didn’t feel any pain when I saw my bones and tendons. I could just see the blood pumping.”

He was picked up from the rocks and boarded a dingy, but his plight was far from over. He now faced a three-hour boat ride to the nearest hospital.

Fellow passengers, one of whom was a British doctor, attempted to stem the bleeding while Newman took some painkillers, a couple of shots of tequila and a mojito to stop the pain.

He was treated at a hospital on San Cristobal where his broken foot was reset, and torn ligaments repaired. He will travel back to the UK for further treatment and may require additional surgeries.

There have been a total of 7 shark attack bites* in 2018, 0 of which were fatal*; 0 were reported in the US, with 0 occurring in Florida and 0 in Hawaii. Four have been reported in Australia, none of which was fatal.

*two with no injury