A surfer was bitten by a shark June 10 at Ocean Isle Beach, North Carolina. 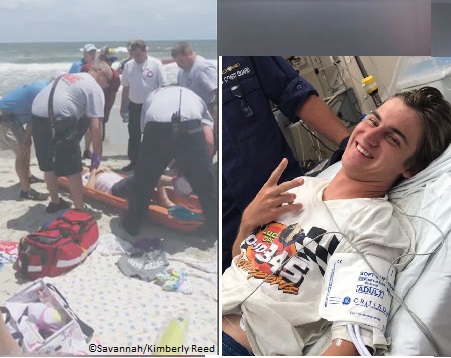 Austin Reed, 19, his brothers Ethan, Tyler and several friends were hitting the waves around 2 p.m. when he felt something grab his foot.

“I remember I told my friend, if there was any time to get bit by a shark, it’d be today. I don’t know why I said that. And then, I just felt something grab onto my leg and I was just like, oh my gosh,” Reed told WSOC-TV.

At first when Reed told his friends a shark bit him, they did not believe him because he’s known as a jokester. Things changed once they saw his bloody foot. Reed slid onto a friend’s board and the group headed into shore.

The 19-year-old hobbled onto the beach and was given first aid until paramedics arrived.

Reed was taken to the New Hanover Regional Medical Center where he received stitches; he is expected to be released from the hospital in the next few days.

He said the event wouldn’t keep him from the water or the waves.

The incident comes on the heels of a much more serious attack June 2 when Paige Winter, 17, was mauled by a shark at Fort Macon State Park.

She was in thigh-high murky water when an estimated 8-foot long shark grabbed her leg.

The teen fought the shark but was badly injured on her hands, leg and pelvic region.

Winter’s leg had to be amputated above her left knee and has been through multiple surgeries in an attempt to save her hand and fingers.

The outpouring of support has been amazing, and she has been offered a free prosthetic leg.

Four fatal**; 18 were reported in the U.S. (including one fatal), with 7 occurring in Florida (3 provoked)  7 in Hawaii (2 no injury, 1 provoked,1 fatal) and 2 in California (1 no injury). Seven have been reported in Australia, zero fatal. Four unconfirmed bites, worldwide, not included in the total count.