A surfer has been bitten by a wobbegong shark in New South Wales, Australia March 12. 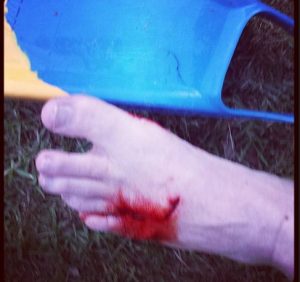 Mike Porter had minor cuts after a shark clamped on to his foot at Lighthouse Beach around 6 p.m.

“I’d just come up from a wave and I was getting ready to take a photo when I felt it latch onto my foot.”he told Port News

“I didn’t know what to think, but I had a pretty good idea it was a shark.”

The 40-year-old then started fighting the shark.

“I just kept punching it until it let go, I think I probably hit it twice. But I kept on swinging for a while.”

With help from another surfer, Porter was able to make it back to shore and then went to the hospital, where he received stitches.

The Department of Primary Industries determined a wobbegong was responsible.

Wobbegongs are generally not dangerous to humans unless they are provoked. They have bitten people who accidentally step on them in shallow water; they may also bite scuba divers or snorkelers who poke or touch them, or who block their escape route. Wobbegongs are very flexible and can easily bite a hand that is holding on to their tail.

They have many small but sharp teeth and their bite can be severe, even through a wetsuit; having once bitten, they have been known to hang on and can be very difficult to remove.
This is the ninth shark bite reported this year.

Click here to view a map of all 2014 shark bites