A teenage spearfisherman had a tense run-in with a shark in Western Australia. 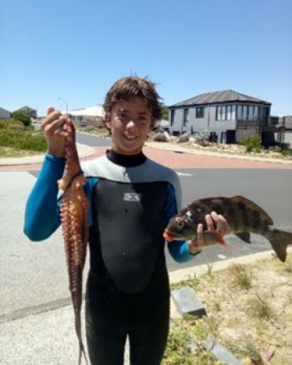 The 14-year-old speared a cod around 5:30 p.m. when he saw a black shadow coming toward him.

“This shadow was fastly approaching me, and it actually turned out to be a shark,” he told The West Australian daily newspaper.

“I was really scared at that moment,” Martin said. He knew not to turn his back on the (2 metre) 6-foot long shark that he believed was coming for his freshly-speared fish.

Martin used his pole spear to poke the grey nurse shark, also known as a sand tiger shark, in its snout and it quickly swam away from the fisherman but went after his discarded fish.

The teenager swam to shore and warned others about the shark.

His mother contacted authorities and used the BEN system to share their location.

The BEN system was introduced last year by Rick Gerring, brother of Ben Gerring who was killed by a shark in 2016.

Ben was surfing at Falcon Beach, located about a mile north of Avalon Point, when a shark severed his leg just below the knee.

Fellow surfers helped Ben out of the water and began administering first aid, but the 29-year-old had lost a large amount of blood. Beach goers administered aid for around 20 minutes until emergency personal arrived.

Rescue services had been delayed due to the confusing coast line.

The BEN system has emergency number signs placed at different beaches along the coast to help citizen pinpoint their locations.

In addition to the BEN system, Rick Gerring has also been involved with OMNA tourniquets.

Diver and former Recon Marine Carson Henderson developed the portable tourniquet designed for both in-water and solo use.

“Ben died from hypovolemic shock, which occurs when you lose 1/5 or more of your blood. Essentially, the heart no longer has enough blood to pump to the body,” said Henderson. “His brother, Rick Gerring, said the rescuers tried to use the leash cord [as a tourniquet], but it didn’t work well.”

There have been a total of 6 shark attack bites* in 2018, none of which were fatal. Three have been reported in Western Australia and one in New South Wales.

*Two with no injury.