Another shark bite has occurred in North Carolina, and a rare shark bite was reported near Savannah, Georgia.

The North Carolina bite occurred off Bald Head Island, when an 8-year-old was bitten by a shark on his leg by a blacktip shark June 16. The unidentified youth was swimming around 4 p.m. when a shark grabbed him.

First responders treated the boy for multiple puncture wounds and determined the pattern was consistent with a shark bite. After receiving initial treatment, he was transported to the mainland by ferry and taken to a local hospital.

A shark bite occurred in the same general location in 2018.  A young, unidentified female swimmer was on a sandbar August 5, when she was bitten on the right calf. She was taken to New Hanover Regional Medical Center in Wilmington; however, further information on the extent of her injuries is unavailable.

This is the third shark bite reported in North Carolina for 2019.

On June 11, Austin Reed, 19, was surfing with a friend off Ocean Isle Beach, North Carolina when a shark grabbed his right foot around 2 p.m. The shark had pulled Reed off and away from his surfboard, but Reed’s friend pushed him onto his board and used it for both to return to shore.

Paramedics were called to the scene and Reed was transported to New Hanover Regional Medical Center where he received stitches.

A much more serious incident occurred June 2 when Paige Winter, 17, was mauled by a shark at Fort Macon State Park.

The young woman was in thigh-high murky water when a bull shark grabbed her leg. She fought the shark with the help of her father until it released its grip.

Unfortunately, the teen lost part of her leg from the knee down, and has had multiple surgeries to repair her damaged hands.

A rare shark bite has been reported near Savannah, Georgia. 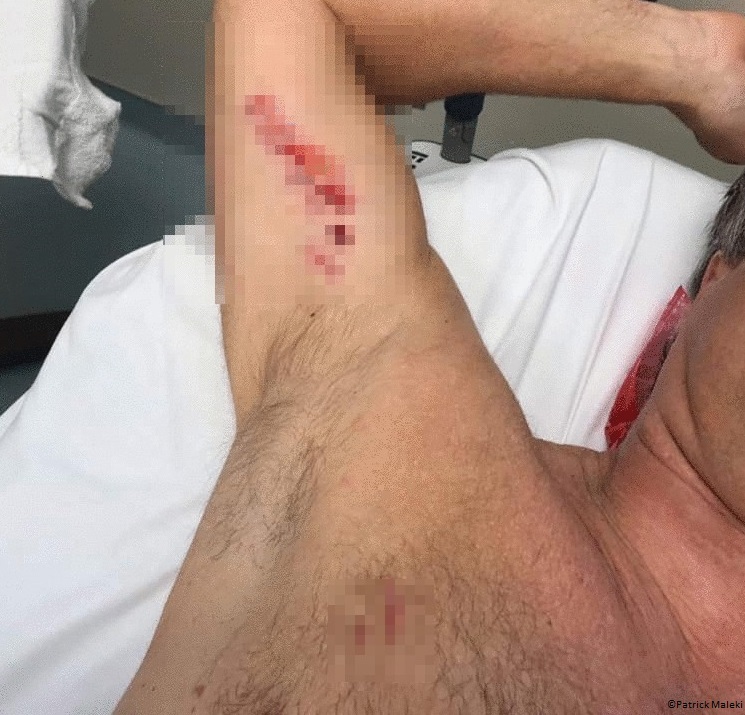 Gene Brooks, 64, was swimming off a floating dock in the Wilmington River June 16, near Wilmington Island Road when he was bitten by a shark on his shoulder.

Around 9 a.m. Brooks, a personal injury attorney, headed down to the dock for his morning swim as he has done for 29 years.

“I jumped in the water made a big splash and was breast stroking; it was a beautiful morning,” he told Tracking Sharks.  “The water was flat the current was still, but coming in some.”

He swam down river for about a minute and then turned around in the 30-foot deep water and headed back toward his dock.

“I was about 20 feet from the dock and all of a sudden it was like a wham! It felt like somebody had punched me with a glove from underneath and hit me on the shoulder,” he said. “The best way I can describe it is like someone bigger than me with a boxing glove just hit me in the shoulder.”

He immediately knew he had been bitten by a shark.

Brooks immediately began splashing and kicking to scare away what he was certain was a shark and then swam to his docked boat and used the ladder to climb out of the water.

He walked back to his house and his wife, a retired registered nurse, treated the wound before the two headed to Memorial Health University Medical Center. 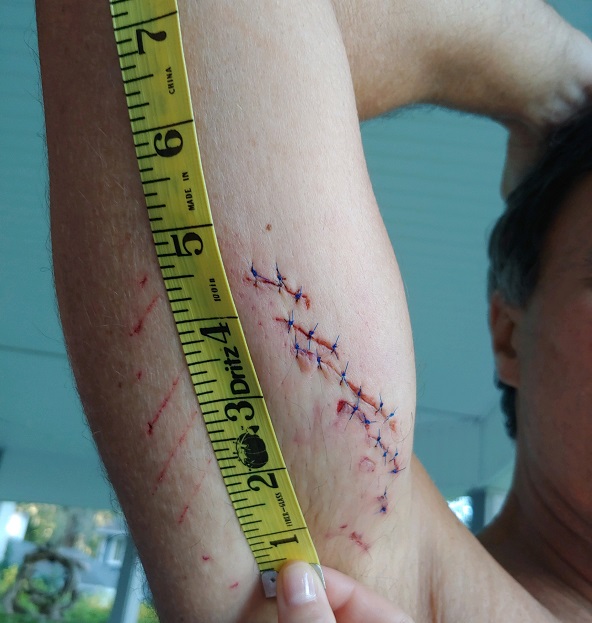 Doctors used 20 stitches to sew his inner right bicep and another three to close the small chest laceration.

Based on photos and measurements of his wounds, the most likely species involved was a 4- to 5-foot bull shark.

Brooks feels extremely lucky that the wound wasn’t worse. Noting that the shark’s teeth “missed the muscle by inches and it didn’t hit any arteries,” won’t keep him out of the water, but his daughter did order him a shark repellent device.

The area has been experiencing super spring tides and murky water from recent rains.

Water quality can add to the chance of a negative encounter with a shark. Sharks may not be able to differentiate a human from a fish in low visibility water.

The last shark bite in the area occurred in 2014.

Ayden Meadows, 12, and his mother were surfing on the south end of Tybee island when a shark grabbed Ayden’s right leg. The young man received 11 stitches, and planned on hitting the water once he was healed.

There have been a total of 36 shark attack bites (33 with injury, 8 of which are considered provoked*) publicly reported and verified in 2019.

Four fatal**; 20 were reported in the U.S. (including one fatal), with 7 occurring in Florida (3 provoked)  7 in Hawaii (2 no injury, 1 provoked,1 fatal) and 2 in California (1 no injury). Seven have been reported in Australia, zero fatal. Four unconfirmed bites, worldwide, not included in the total count.
*Provoked defined as spearfishing, feeding sharks, fishing, etc. (listed with green marker).
**One possible scavenge