Two shark bites have been reported off Fire Island in New York on July 18.

The first report involved a 12-year-old girl who was wading in the water at around 11:15 a.m.

Lola Pollina was in waist-deep water when she was bitten on the right leg off Sailors Haven Beach.

“I look up and I saw her in a panic,” her father Philip Pollina told Newsday. “She came out and her leg was covered in blood.”

“I think people didn’t realize what had happened,” he said. “The lifeguard thought it might be a Portuguese man o’ war, but once he saw the wound, they said, no those are teeth marks.”

Lola had several puncture wounds which will require stitches on her right calf but stayed calm and walked on her own.

“She’s a trouper,” Pollina said. “It was a nasty bite, there was some big gashes. Thank God we were right in front of the lifeguard stand.”

A short time later at Atlantique Beach, which is around 4-miles south of Sailors Haven Beach a boogieboarder was bitten.

Matthew Donaldson was bitten on the leg as he played in the water.

“The boy walked out of the water with a series of puncture wounds to his leg and was immediately attended to by a trained lifeguard (a medical student), who cleaned and dressed the boy’s wounds,” the Town of Islip said in a media release.

“EMTs immediately arrived on scene and removed a tooth still lodged in the boy’s leg. DEC officials are analyzing the tooth to determine its origin. The 13-year-old walked onto and off of a police boat, and was taken to Southside Hospital, where he is being treated for non-life-threatening injuries. The Town of Islip has closed all Town operated ocean beaches for the remainder of the day.”

Experts at the University of Florida’s International Shark Attack File confirmed the tooth fragment was from a sand tiger shark.

This is the second time two shark related incidents have been reported on the same day on the Atlantic Coast.

On Friday 13, two were reported off Fernandina Beach in Florida. 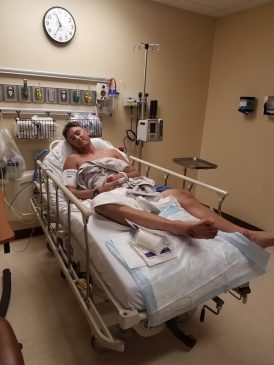 “It was a west wind, so it was kind of hot out, you know all the wind coming off the land instead of the water,” he told Tracking Sharks by phone. “I got back in the water to push him [Emerson] on some waves.”

The 30-year-old was floating on his stomach in around 2 feet of water as he watched Emerson ride a wave around 25- to 30-yards into the beach.

“I was just lying there watching him paddle back out and I felt something grab onto my foot.

“At first, all I felt was pressure, I didn’t feel any real pain. I just felt something grab me,” he said.

The shark had taken hold of his foot causing  several lacerations and stripping the top tendons of the right foot.

As Theobold was being loaded into the ambulance, he heard radio calls for a second bite on the same beach.

The second bite involved a 17-year-old who was wading when a shark bit his foot. Authorities raised double-red flags and closed the beach until further notice.

There have been a total of 55 shark attack bites (42 with injury, 9 of which are considered provoked*) publicly reported in 2018. Two fatal**; 17 were reported in the U.S., with 7 occurring in Florida and 2 in Hawaii. Fifteen have been reported in Australia, none fatal. Six unconfirmed bites, worldwide, not included in the total count.