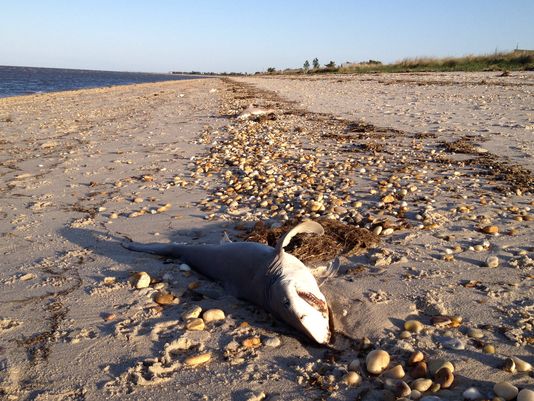 Dozens of dead juvenile sharks washed up along a mile or more of Slaughter Beach on Saturday, apparently discarded by a commercial fisherman in Delaware Bay after they schooled into his drift nets.

“A guy was legally fishing for rockfish out there and came into a whole school of sharks and they got tangled up in his net,” said. Senior Cpl. Carl Winckoski, a Deparatment of Natural Resources and Environmental Control Fish & Wildlife officer.

“You can’t have sharks taken that way right now, so he discarded them. There’s really nothing else he could have done.”

More than 50 of the 1- to 2-foot sharks still littered the beach late Saturday, with some still washing in and out of sight in the surf.

Winckoski said had they had been tentatively identified as a sand shark, although the species had not been confirmed. A shark researcher who had been working the area, he added, reported the incident.

“At times we see a lot of that, where someone is out fishing for something with their nets and they can’t have a species and they start discarding them and it looks terrible to the public, but they really don’t have any recourse,” Winckoski said.

Dan and Kate Jennings of Lincoln, who said they walked Slaughter Beach “pretty regularly,” said the sight was new, and troubling.

“We saw them in twos and threes,” Dan Jennings said. “In a quarter mile, we might have seen 15. It’s not uncommon to see one or two, usually fishermen leave them, but today ….”

One man who said he was a longtime Slaughter Beach resident, but declined to provide a name, said he sees the results of unintended catches too often.

“I’ve come out here and seen 100 striped bass like that, that were too small so they just got rid of them,” the man said. “Something has to be done about the commercial fishermen doing that.”

Tiesha McIntosh of Milford said she was startled by the sight as she shooed her puppy away from a shark.

“I’m afraid to get in the water. I’m not big on that, and I’ve never seen sharks up on the beach or even along the shore,” McIntosh said.

Original story at Delewareonline
You can contact Mr Montgomery at (302) 463-3344 or jmontgomery@delawareonline.com

Editor’s note:  I would like to thank Mr. Montgomery for the use of his excellent story. Bycatch is a terrible waste.