Video of a toothless great white shark has been shared on social media.

Doug Vanderby was diving with Shark Diving Xperts and was lucky enough to film the shark as it passed by his cage off Guadalupe Island on October 26, 2016. Because of the large number of missing teeth in the shark’s mouth, Vanderby gave the shark the nickname of Gums. It is believed to be the same great white shark that became stuck in a cage last year.

We were able to speak with Mr. Vanderby about the nearly toothless shark, and he generously took time to shed some light on his video.

How long had you been in the water before Gums the shark showed up?

“Our daily dives started at 8 a.m. He showed up around 8:15 with another great white. What I initially noticed about him was that he was really going after the bait. When he did get it, he was not repeatedly biting down on ‎it to cut it away from the twine like other great whites. Instead, he was trying to pull or swim away with it.” 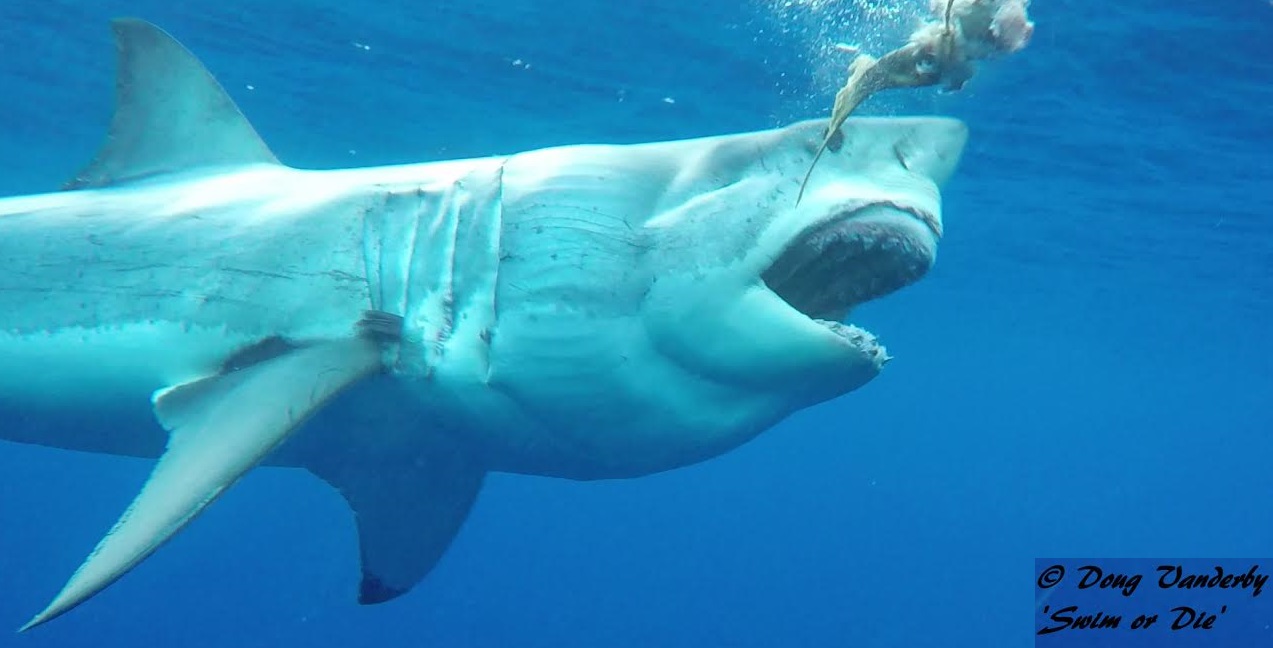 What did you think when you first saw of a great white shark with no teeth?

“At first, I kind of felt sorry for him. A great white without its teeth? But by the way he was behaving, he was so mesmerizing to watch. He was always going for the bait.

“Most sharks just kind of cruise by when the bait is pulled away by the wrangler. Gums, on the other hand, would turn on a dime and come back at it, which you can see in the video. He also stayed near the surface, swimming by us at eye level, which made great photos and vids.

“When I was out of the cage during the rotation I started talking to a Mexican great white researcher, who was on board. He was very excited and was in the water on the next rotation to check him out. He seemed to think that this shark was the same shark as the famous caged shark. Outside of his teeth, which, of course, were starting to grow back, he thought the shark was in pretty good health. I really didn’t put two and two together that it could possibly be the caged shark.”

Mr. Vanderby’s caged shark description refers to a filmed incident on the shark diving ship Solmar V. During the event, a great white shark became stuck in a surface shark cage. The footage was posted to YouTube October 13, 2016, and shows a male great white that looks just like Gums the shark, as it rams into a shark cage and then became stuck.

The shark appears struggles until it finally breaches out the top of the cage and swims away. A diver who was in the cage was able to exit out of the bottom and climb back into the cage after the shark left.

“We were running a typical tourist trip in late October, just a week or so after the Solmar incident occurred when a small shark arrived at our boat and began to go for our hang bait.

“The shark immediately caught my attention as, bizarrely, it was seemingly missing all its front upper and lower teeth. Time and time again the shark would grab hold of the bait and unable to bite through it or cut it free from the rope, would then just let go.

“I have been working with great white sharks for 8 years in both Guadalupe and South Africa, and after meeting thousands of individuals, I had never seen a shark like this before.

“Over the years, I have helped to identify over 200 great white sharks at Guadalupe and have been able to recognize individuals immediately when they visit the boat, even becoming fond of certain animals.”

Do you think Gums is the same caged shark from the Solmar V incident?

“From grainy stills taken from the Solmar footage, although I am unable to say 100 percent that this is the same shark, I feel very confident that it was for a number of reasons.

“Firstly, the size was very similar. I have over the years acquired a well-trained eye for sizing great white sharks. 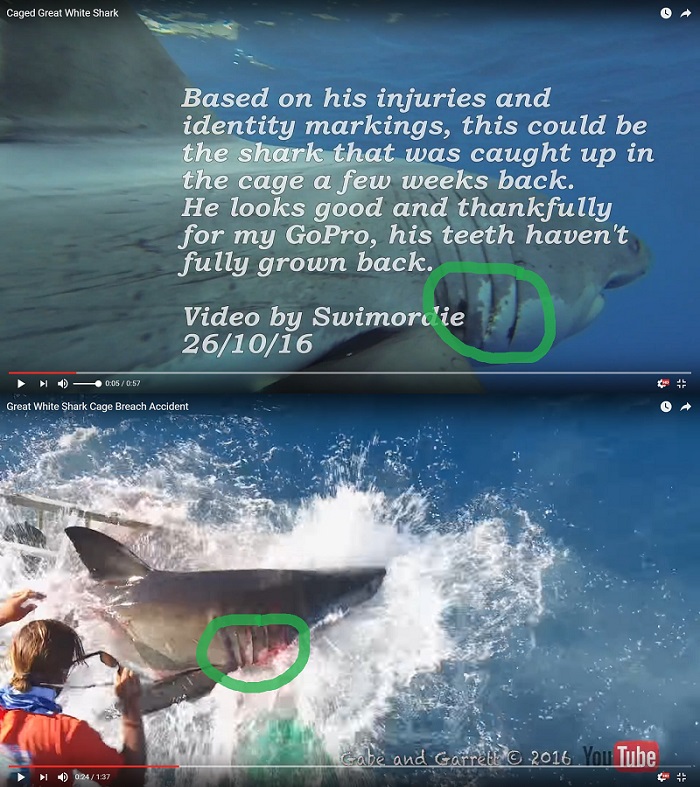 “Secondly, its markings were very similar. The shark in the Solmar footage has very similar markings around its gills as well as an obvious spot on its left side that can be seen in the viral footage when the shark escapes out of the top of the cage.

“Having looked at the animal’s dorsal fin, it also has a very similar trailing edge and a clear scratch or streak can be seen on the leading edge of the fin in both the Solmar footage (when the shark takes the bait) and from footage from our guests.

“The shark [Gums] we saw had scratches down its flanks as well as cut gills. (The shark from the Solmar was seen bleeding from its gills.) Plus, of course, the fact that it has no teeth!

“Contrary to popular belief, white sharks’ teeth are actually fairly loose and the animals often lose some when attacking their prey. I cannot think of any reason why a shark would lose all its teeth, unless it had smashed them all out, such as the potential Solmar shark.

“When you put all this evidence together—the size, the teeth, the scratches, the gills, the markings, the similar dorsal as well as the fact that it was seen so soon after the incident (all the boats out at Guadalupe see the same sharks over the course of the weeks operating out there)—I think there is a strong case that the shark we encountered was the same animal.”

What are your thoughts on the shark’s survival? We know sharks constantly lose and replace teeth, but missing a whole upper and lower set, that’s a lot of missing teeth.

“We estimate great white sharks go through approximately 30,000 teeth in a lifetime, so no doubt this animal will have a fresh set after a few weeks. In the meantime, can it survive without being able to catch food? Some estimates claim, based on studies, that white sharks can survive great periods without food (up to a couple of months). These animals conduct vast migrations out in the wilderness of the great ocean so nature has designed them to be survivors and rely on their fat storage if need be. As well as successful predators, they are also great scavengers and it is always a possibility this animal could survive on dead food for the coming weeks.

“Sharks have been around for millions of years and are survivors. No doubt this animal will be affected by the loss of teeth for the time being. However, over time I believe it will soon be doing what a shark does best.

Very true. National Geographic mentions that after eating a fatty meal, whites can last a month or two without another big meal.

Mr. Vanderby, how did it make you feel seeing the shark from the cage? ‎
‎
“Once I realized it was him, and knowing he was not seriously injured and his teeth were growing back, as my up close and personal video clearly shows, I was happy to see he was around.” 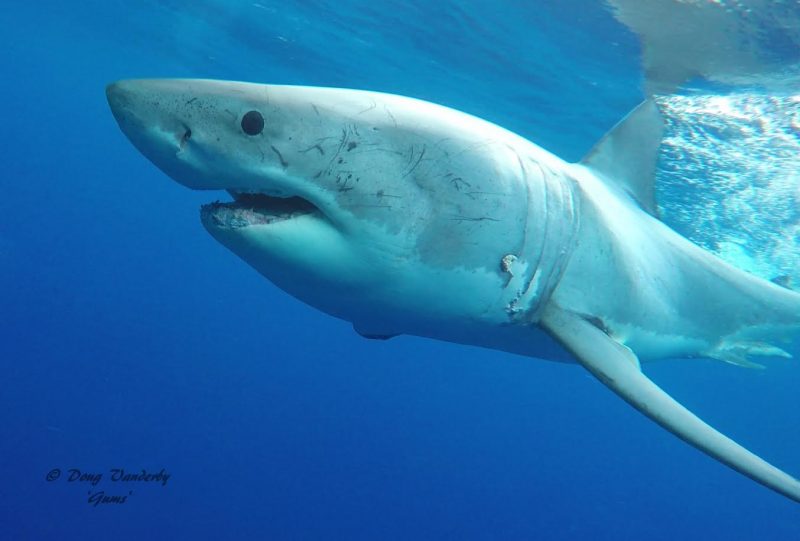 What are your thoughts on shark cage diving after seeing the shark?

“Cage Diving is a positive. Great whites are so misunderstood and have such a bad rep. When you see them in their own environment, you are seeing a creature that has adapted through time. They are masters of stealth, blend in so well in the water. They would just appear out of nowhere. Most people know great whites from photos taken of them dead on land with their jaws open to show off its teeth. Or someone has videotaped them from a boat saying they’re being attacked.

“[If they are] not being attacked, they are very curious creatures and they are checking out what is in their environment. I was fascinated by how they move thru the water. Each shark seems to have their own personality, ranging from shy to aggressive to curious. I cannot tell you how many of us on the trip felt that the great whites were checking us out as much as we were checking them. In one of my videos, I’m on top of the cage, 30 feet down, and a 14-foot female just cruised up from the bottom and came within 5 feet of me. At no time did I feel I was in danger. I will say this, I have a very healthy respect for great whites.

“I also believe cage diving aids in the education of great whites and, from a conservation point of view, this is a bonus. I do know that my videos and pics were a hit with children. A friend of mine who is a teacher had them as a topic in her classroom. This also cannot hurt in educating the world about the crime of shark fining.

“The incident involving the caged shark was a one off. Thankfully, no one in the cage was injured (Although I must say that being in the cage would have been a rush). Jaws turns into Gums, and by now I’m sure he’s back to being Jaws. Hopefully, all involved learned from the incident.”

What should be done to help support and save sharks?
‎
“Educate ‎people that Sharks are an important part of the ocean environment. Also, ban shark fining! It’s useless and it is killing off sharks at an alarming rate.”
‎

Editor’s Note: While no one can say with 100 percent accuracy the semi toothless Great White Shark nicknamed Gums is, in fact, the same shark from the Solmar V cage incident, but there is some compelling evidence. It is good to know Gums should survive, no matter how he lost his teeth. And, thanks to Mr. Vanderby’s photos and video, a new shark can be added to the list of known sharks in Guadalupe.