Bodi Dee Roberts pleaded guilty to a misdemeanor count of unlawfully taking a shark without a permit April 19. He has been sentenced to three years probation, ordered to pay a $250 fine and is banned from the Oceanside Pier for an unknown amount of time.  His fishing rights have not been revoked.

A fisherman has been charged with catching and keeping a great white shark on a California Pier.

Bodi Dee Roberts, 21, is being charged with several misdemeanor charges including destroying or concealing documentary evidence, unlawful possession of game, deterioration/waste of fish and the unlawful taking of a white shark without a permit.

According to CBS8, if Roberts is found guilty, he could face up to a $1,000 fine and six months in jail.

Social media has been popping with photos of what appears to be a great white shark killed on a California pier. 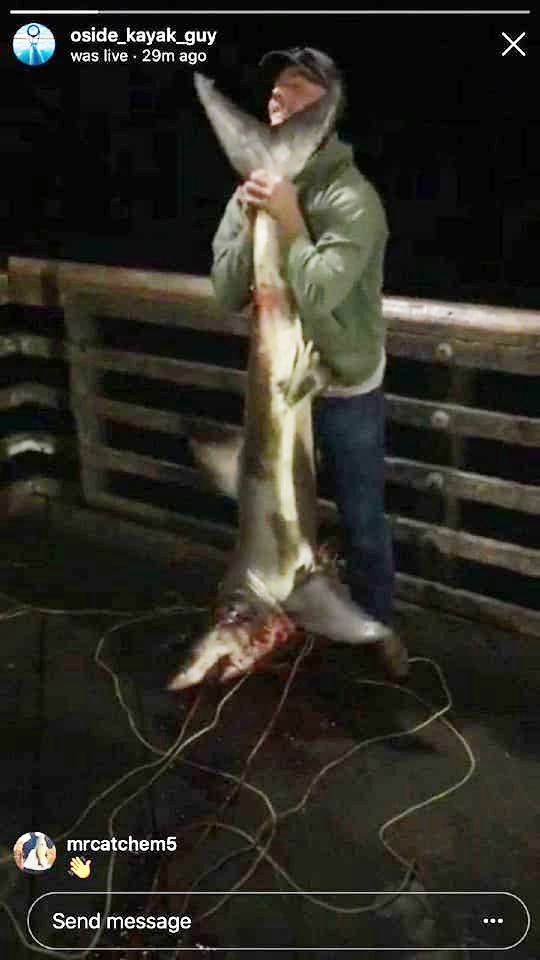 Adding to the uproar is the fact that great white sharks are protected by both Federal and California laws.

Angler J. Merrill was on the Oceanside pier Jan. 5 when a large shark was hooked after sunset by a man who proclaimed himself to be a shark fisherman.

As the shark was brought near the pier, Merrill said the man descended a long ladder at the end of the pier to get a closer look at the shark. According to Merrill, the man identified the shark as a mako.

Mako sharks and young white sharks can look very similar, and the man requested a second angler confirm the species. After the second man confirmed the shark as a mako, it was gaffed and several fisherman pulled the shark up the side of the pier.

Once the shark was brought over the rail and onto the pier, Merrill said two other anglers also identified the shark as a mako based on its teeth.

“No fisherman present, not one, stepped forward and indicated it might be a great white once it was under the pier lighting and in full view,” Merrill said in a statement.

At that point the fisherman who hooked the shark killed it. (sensitive images)

“There was tons of excitement and cheering for bringing in this mako shark,” Merrill said.

Merrill who is very familiar with social media was asked to capture part of the incident with his mobile phone and began live streaming the event.  Eventually he passed his phone to another person so he could pose with the shark.

Shortly after Merrill left the pier, things took a turn for the worse. Multiple people began identifying the shark as a great white and the California Department of Fish and Game became involved.

Capturing a great white shark is a misdemeanor in the state and carries a maximum penalty of $10,000.

The shark was seized by CDFG and is being evaluated by one of the department’s shark experts to confirm the species.  The investigation into the matter is active, and agents from the CDFW are moving forward with the investigation as if the shark is a great white.

“Everyone involved in this event is sick about the possibility of this being a great white. I am deeply sorry that this happened and sorry for the part I played in it, if it is determined to be a great white,” Merrill said.

He said his only involvement was in helping pull the shark out of the water with 8 other people after it was identified as a mako.

Unfortunately, several screen captures of the live stream show Merrill’s user name.  Some viewers have perceived this as if he actively participated in killing of the shark, instead of celebrating what he believed to be the legal catch of a mako shark.

He has since received hateful and vicious messages, impacting his private life and stressing him to the point of missing school and being afraid to ride his bike. Around five days when the shock wore off, Merrill became angry.

“The shark fisherman at the pier are amazing and legit fisherman, and I am upset that this event may have given them a bad name and made them look like they don’t know what they are doing,” he wrote.

Merrill has been in contact with CDFG and has learned several lessons from the event, including to never trust identification of a catch from other anglers and he seeks a better understanding of fishing rules.

According to a CDFW spokesperson, if the shark is confirmed to be a great white and deemed to be caught unlawfully, evidence will be turned over to the district attorney’s office to determine possible charges.

Merrill did not respond to a request for comment before this article’s publication.

Merrill has not been charged in conjunction with the event.