Alex Wright has been sharing his experiences while working on a shark cage diving boat. In Part One, he told us about cage operations off Seal Island in South Africa. 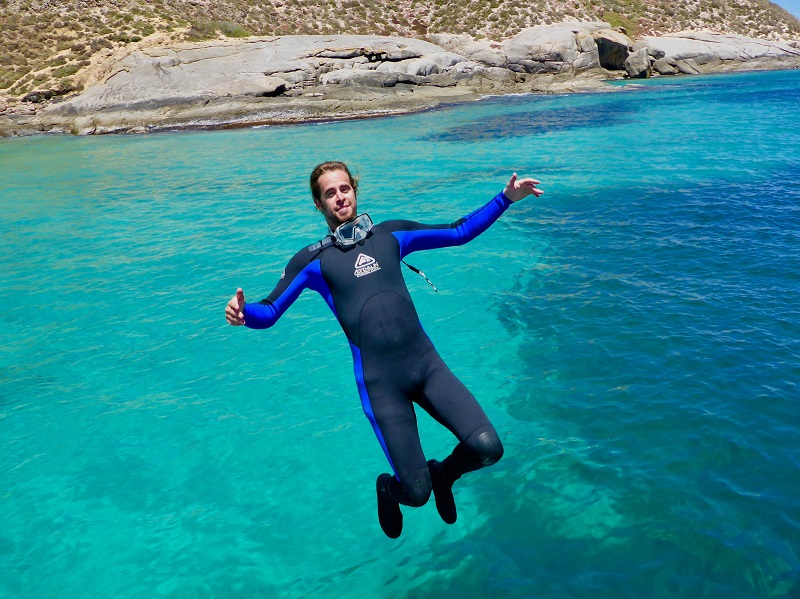 “In November of 2016 I traveled to South Australia on five flights, taking some 30 odd hours to get to Port Lincoln. This operation was my first official job working on a boat, so I was a little anxious.

“Calypso offers swimming with Australian sea lions at four different locations, and have a combo tour where you can swim with the sea lions and cage dive with great white sharks on the same day.

“This adventure lasted about 45 minutes before we were on our way to the Neptune Islands to get to the real fun. On the way there, guests assigned themselves to a group of around 6 to 8 people. 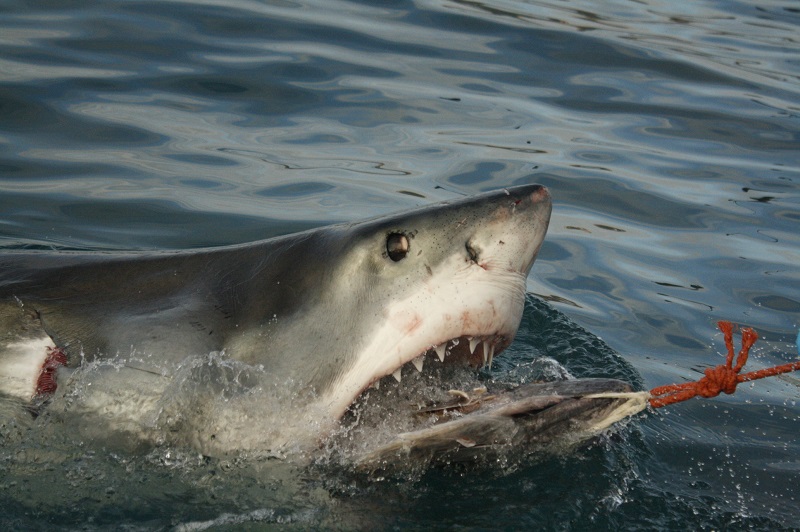 “We have a replica jaw of a great white so the guests could grab a photo [of it] with them either before or after the cage diving. The cage on the main boat was large enough for 8 people to be in comfortably at one time. This cage also had inner bars for your feet and hands, and a well-sized viewing gap, but not large enough to be concerned about.

“After arriving at the Neptune Islands and anchoring up, the skipper would give a briefing and then we lifted the cage with a crane, pushed it into the water and tied it off to the boat. I proceeded to hook up the dive regulators so people could breathe underwater. As the coxswain (essentially a second captain) would start to berley [chum] to attract the sharks, I got the guests suited up with wetsuits. 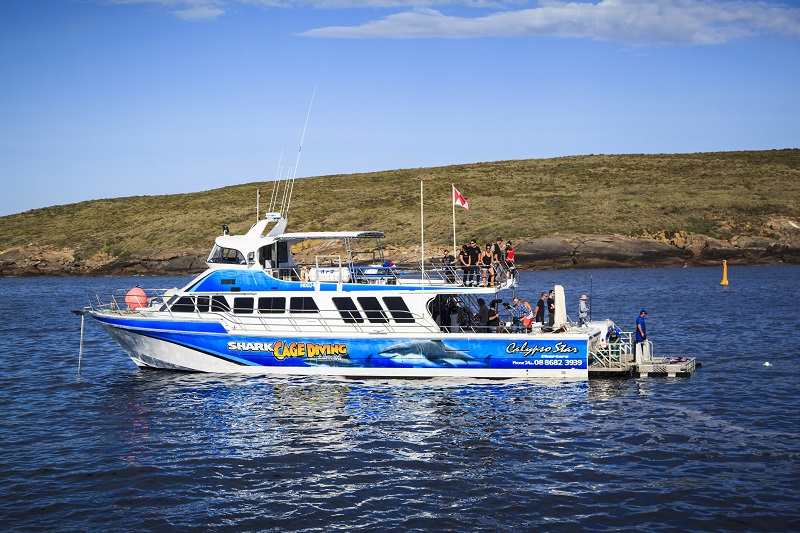 “Calypso is the only one-day shark cage diving operator that is permitted to use natural fish berley to attract sharks. They also use tuna gills in addition to the berley.

“Meanwhile, on the other side of things, snacks were served first and then breakfast was served as we made our way to the islands. Snacks and drinks would be available throughout the day except for alcohol, which would only be available at the end of the diving.

“The hostesses, and sometimes myself, would prepare the lunch, and afternoon snacks for the guests. During other trips such as the twilight, guests would be served lunch first, an afternoon snack and dinner on the way back to port.

“For all trips (combo, twilight and the main tour) though, the dives operated on views, not time. The time it took the sharks to arrive varies from day to day. Some days it seemed like they would be there waiting for us, and on others it would take an hour for one shark to arrive.

“We had weight vests that myself and the other crew would put on and take off the guests. The weight was about 15-30 kg or 30-40 lbs., and we would adjust it accordingly for those who needed it. We also had weight belts for younger guests. 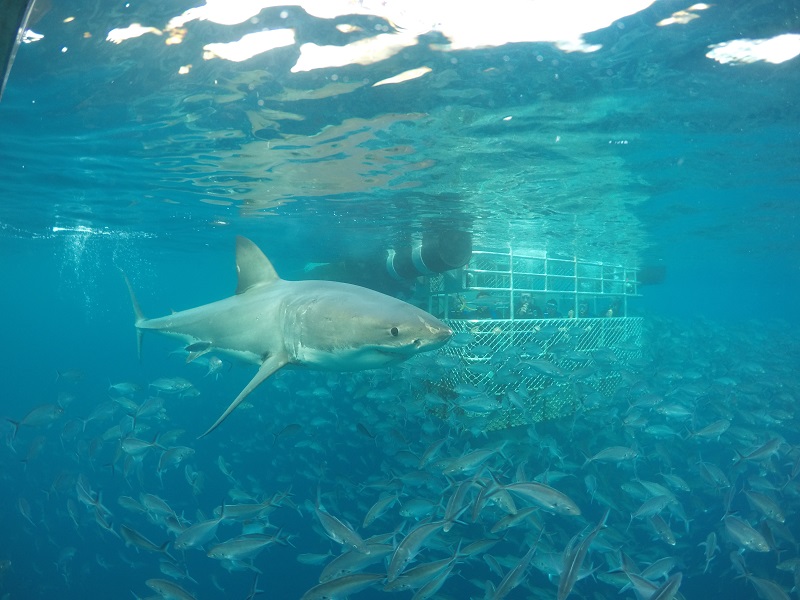 “On this boat, you were hooked up to a hookah, to breathe underwater. We also set up a practice regulator for those unfamiliar with scuba diving. It makes a world of difference for people who are nervous or anxious about breathing underwater. It’s not the waves, the sharks, or the cage that makes people anxious in this line of work, it’s the breathing apparatus that terrifies most people.

“It is only natural to fear this. Most people are not scuba divers, and we humans fear what we do not understand and being underwater is not our element. It comes down to how the crew handles the situation of uneasy guests. I found what works is to treat them as you would want to be treated. I simply tell the guest to focus on me first, to hold onto the ladder with both hands, lean back and place just their face in the water looking down at the toes and slowly breath in and out.

“I tell the guest to take slow deep breaths and just focus on their toes no matter what is going on in the background. They may miss something cool like a shark breaching or swimming close by the cage, but their comfort level will have risen, so when they are in the cage they don’t miss a thing.

“Once a group has enough views, as determined by the skipper and coxswain, we would lift the cage doors and drop them, so guests knew it was time to switch places. We helped them outside the cage and up onto the boat where I would take off the weight vest before placing it on another guest. 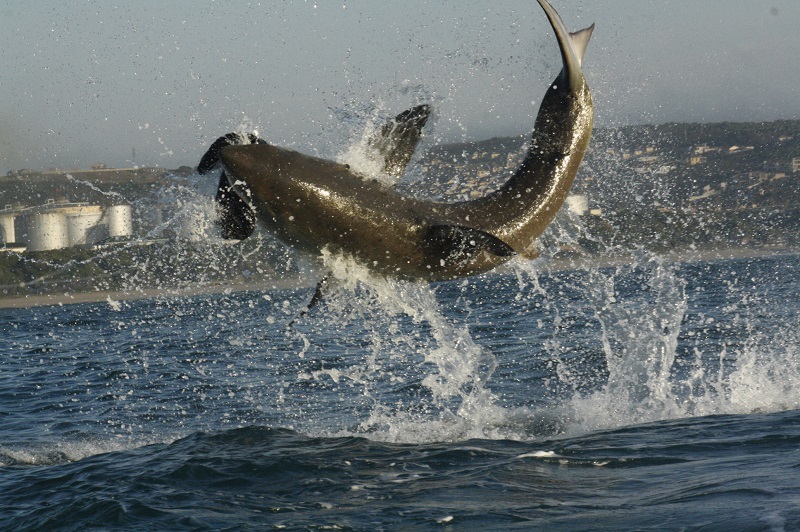 “After the guests got out of the cage, and the next group was ready, we would get two people at a time and take photos of them entering the cage. Throughout the day I, or the host/hostess would be taking photos of the sharks and customers hanging out on the boat.

“After the last group gets out of the cage, we pulled the cage and secured it on the boat using heavy-duty straps and line to tie it off to the boat and pull the anchor.

“I would stow gear, unhook all the regulators, finish rinsing the wetsuits and hang them up, and rinse the deck with a saltwater hose. Finally, it would be time for the ride home from the Neptune Islands. I handed out evaluation forms, certificates of completion, assisted with merchandise sales, and the cleaning and tying off the boat. 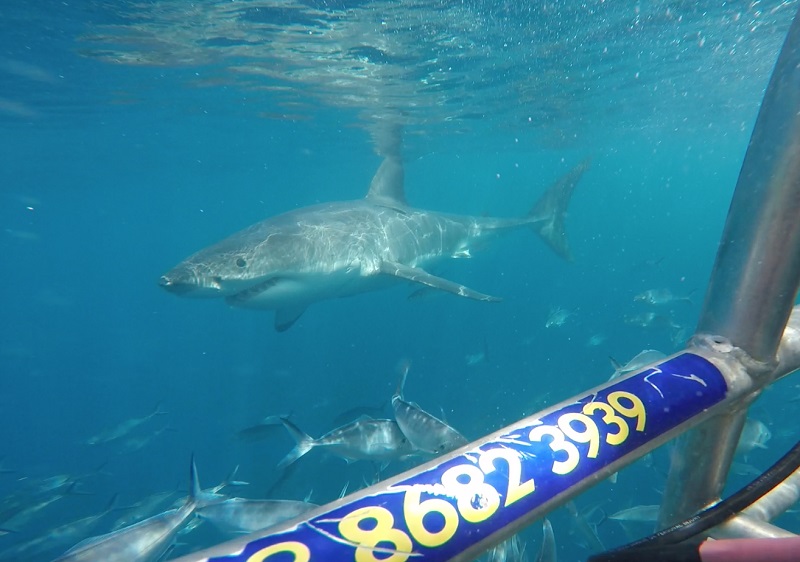 “Of course, in both locations I had the pleasure of being in the cage numerous times. The clients were the first to go in, and if there was time left, the crew would get in. In South Australia, I had the chance to get in a single cage and 4 great whites surrounded me as I was filming with the GoPro, and I was yelling with excitement.”

This concludes Part Two of What it’s like working on a shark cage diving boat. Be sure to check back for Part Three when Alex heads to Guadalupe Island. 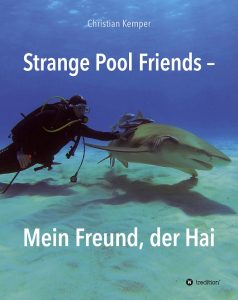