Two spearfishers have suffered injuries from shark bites, one of which was fatal. 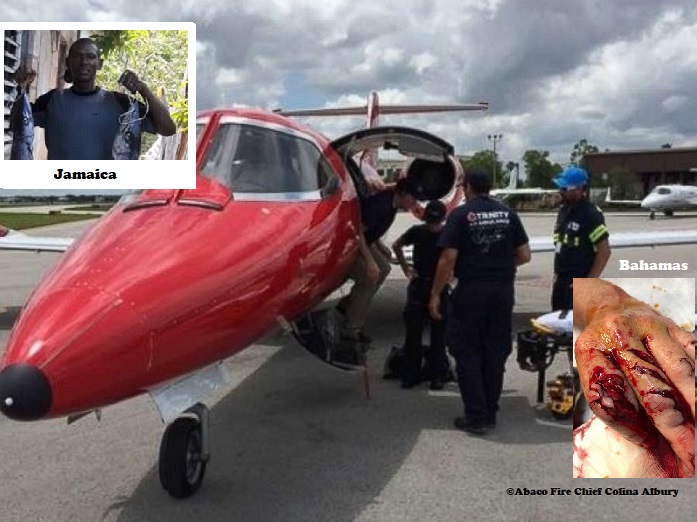 After he went missing, a search of the area where he was last seen turned up shark-bitten pieces of his diver’s gear.

“It [his gear] was torn up real bad, a piece of the chest, it had the impression that the shark has taken a piece of his chest. Because the impression shows of the piece of dive suit that we retrieve had round . . . teeth markings in the middle of it,” Lenford Dacosta told JNN Frontline. A piece of his shorts was also found with shark teeth impressions.

Mr. Malcolm’s body has not been recovered. It is possible he succumbed to another injury and was scavenged by shark(s).

In the Bahamas Maggie Ewing, a female spearfisher was severely injured from a shark bite September 23.

The Massachusetts native, who lives in the Bahamas part-time, was fishing near Treasure Cay Beach on the Abaco Islands.

A little after 1:40 p.m. she speared a hogfish and began swimming to the surface when a blacktip shark took notice.

The shark went for the fish and bit Ewing on her left hand, causing severe injury.

“It’s just unfortunate,” Colin Albury, chief of Abaco Fire and Rescue, told Boston 25. “Just one of those things where she was spearfishing and the shark came from nowhere. A lot of people don’t realize that when you are spearfishing grouper—hogfish give off a sound when they are injured, and that sound is like ringing the dinner bell for the sharks.”

The 32-year-old was flown by air ambulance to a Fort Lauderdale hospital for treatment.

“[She’s a] Real tough lady,” Chief Albury said, “but in severe pain—naturally—to the mutilation of her hand.”

According to local reports, Ewing doesn’t blame the shark as it is a common risk to those who spearfish.

Sharks are drawn to the blood, sounds and vibrations given off by speared fish.

There is some debate as to whether a spearfisher should cut the line or keep a speared fish when a shark, often referred to as the tax man, shows interest.

A close encounter video was posted in 2017 by a fisherman diving off the Ascension Island in the South Atlantic Ocean.

A member of The Adventure Club, a New Zealand based duo that enjoys hunting and spearfishing, was hunting when two sharks chased a yellowfin tuna into his path.

The man was able to spear the fish and the sharks began chasing the fish as the diver pulled in his catch.

Both sharks went after the fish and approached the diver who used a knife to protect his catch.

The diver continued to battle with the sharks refusing to pay the tax and was eventually picked up by a support boat.

There have been a total of 76 shark attack bites (54 with injury, 16 of which are considered provoked*) publicly reported and verified in 2018. Four bites were fatal**; 28 were reported in the U.S (including one fatal), with 11 occurring in Florida and 3 in Hawaii. Seventeen have been reported in Australia, none fatal. Eight unconfirmed bites, worldwide, not included in the total count.