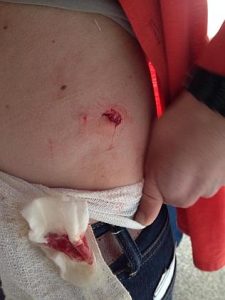 Scott Berry was bodyboarding with a buddy south of Adelaide when he was bitten by a 5 foot (1.5M) bronze whaler. He was around 80meters off Parsons Beach near Victor Harbor when the shark hit. After he was bitten the shark circled him. Mr. Berry told 7News “I was probably most afraid after it had actually got me once, It had me a little worried as to what’s going to go on from here. It wasn’t going to swallow me whole, that’s for sure, but I knew he could do some damage and he could hurt.”

Mr. Berry’s wife Jasmine was extremely proud of a woman who swam out to the body boarders to offer assistance knowing it was a shark bite. “She actually swam further out to get to him knowing it was a shark because my husband was yelling out ‘shark’, she said. “[She] actually went deeper to get to him and she was the first person there to help him so I think she’s incredibly brave to that and I’m really thankful that she was there.”

Mark Longhurst, surfing SA junior head coach was teaching a student at Parsons Beach when the incident happened and told The Advertiser “There was a large school of salmon out there … and obviously other things are out there looking for the salmon as well besides fishermen,” .

Mr. Berry made it to shore with the help of some good Samaritans.  He was taken to South Coast District Hospital at Victor Harbor where he received stitches to his torso and was released.  He said “I’ve had my shark attack now, I should be safe from here on I can get back in the water and you’re pretty unlucky to get bitten again,” he said.

He is correct. Shark bites are extremely rare.  Always play it safe and stay out of brackish water, don’t swim at night or early mornings.  Don’t swim with open wounds and pay attention to the waters.  Most off all make sure you have a buddy.  Never let fear of sharks dominate your mind set.  They are in the oceans, but look as this story states, the shark circled and left the area.  If it had really wanted to eat humans, it would have continued attacking.  It actually had at least two more people in the water it could have easily have bitten, but it did not.

It must have realized Mr. Berry was not a food source and swam away.  Check out my shark attack bites map and see that most of the stories involve a single bite.  Most didn’t even need stitches.  It seems to be a case of mistaken identity.  Agree or disagree? Let me know in the comments below or the new forums.