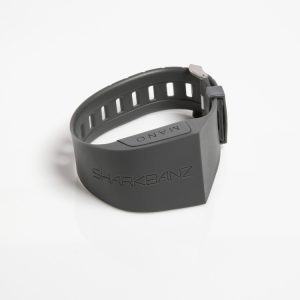 Sharkbanz use magnetic waves to disrupt the electro-receptors of sharks.

On the market for $59.00 and a weight of only 3oz, it might just help prevent some shark bites.

According to the site, the banz have been tested and validated on nine shark species with further testing in progress on another six species.

The site goes on to say that when “once a shark comes near the band, it frequently leaves the area and does not return.”

Keep in mind the band is designed to deter hit and run attacks.

The company commented on YouTube that the band is ” most effective, and can effectively prevent the most common “hit and run” attacks in shallow, “murky water.”

Some sharks, great whites in particular, are known to ambush and travel at extreme speeds when attacking prey.

According to the site, the band should deter a shark that may be in an investigating mode.

The bands contain highly powerful magnets, so there is no recharging or batteries to fool with.

The flip side is, it can fry some electronic and computer devices.

Sharing the concern for the ocean environment 3% of the company’s profits go to eradicate shark finning, prevent new offshore drilling, and aid in the restoration and protection of marine ecosystems.