A fisherman got more than he bargained for off the coast of Malaysia December 21.

Sairol Harun was wading in the waters off Bagan Lalang Beach in Sepang, when a nurse shark popped up.

The shark latched onto the 24-year-old’s left thigh and refused to let go.

Harun waded back to shore with the shark still attached to his leg and called police for help. 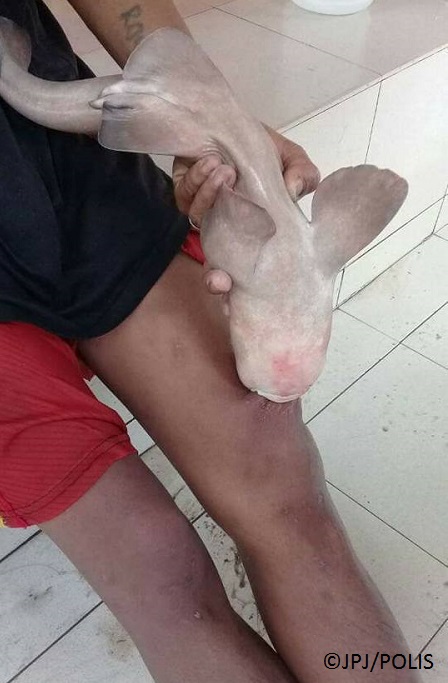 The Malaysian Public Defense Forces (APM) arrived with an ambulance and attempted to remove the shark.

“APM team takes about 10 minutes to release the bite of the fish using special equipment,” the JPJ/POLIS said in Facebook post.

The man was taken to hospital where he was treated for the minor injury.

Nurse sharks are known to be one of the gentlest sharks in the ocean; however they will bit if provoked.

Earlier this month, honeymooner Sarah Illig was swimming with adult nurse sharks in the Bahamas when she was bitten on the arm.

The 25-year-old’s husband filmed the incident, which saw the shark approach from Illig’s left side and nipping her arm.

Young nurse sharks that bite humans will often have a death grip not letting go until they die.

Ervin Maccarty was bitten on the stomach by a juvenile nurse shark in the Florida Keys on September 2. Video shows the sharks refusing to let go until its gills were sliced open.

Another nurse shark held its grip in 2016, when a female swimmer was bitten on the arm.

The unidentified woman was bitten on the right forearm by a small shark near the south end of Red Reef Park in Boca Raton, Florida.

The woman was transported to the hospital with 2 foot dead shark still attached to her arm.

Nurse sharks are normally docile and should be left alone when spotted in the water.

There have been a total of 102* shark attack bites in 2017, 8 of which were fatal*; 48 were reported in the US, with 33 occurring in Florida** and two in Hawaii. Fifteen have been reported in Australia, one of which was fatal. Five unconfirmed worldwide and not included in the total count.

*Two may be scavenge. **One report may have been outside of Florida waters.