A teenage girl is healing from a shark bite she received Jan. 14 at a rural beach in Perth. 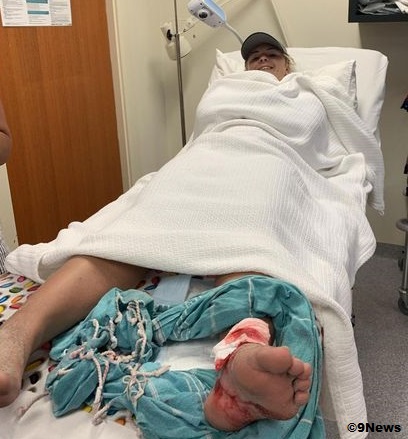 Isabella Brett-Jensen, 15, was relaxing with her friend Lucy Laylor on North Cottesloe Beach, Western Australia, when they jumped in the water to cool off.

Around 11:30 a.m. as the two girls waded into the waist-deep water, Isabella felt something grab her foot.

“I was trying to wriggle it out and then I realized there was something actually suckling on my foot,” she told 9News.

The teen couldn’t see what had a hold on her foot through the murky water, but she was able to kick free and head back to the sand.

“Bits of my foot or like flesh actually fell off as I was walking up. There was blood everywhere,” she said.

After she sat on the sand, she saw teeth marks and called for assistance.

Isabella was taken to the Claremont Medical Centre where she received seven stitches in the deepest bite. She said the doctor told her the bite looked to be from a wobbegong shark.

The girls, who are still shaken from the incident, urge other beach goers to be careful and swim at a beach where life guards are available.

Wobbegongs are part of the carpet shark family and, like their family member nurse sharks, they tend to be docile.  However, they will bite when they feel threatened.

Medical personal transported the man, who had serious lacerations to his leg and hand, to the hospital for stitches.

There have been a total of 2 shark attack bites (2 with injury, 0 of which are considered provoked*) publicly reported and verified in 2019. Zero fatal**; 1 was reported in the U.S (including zero fatal), with 0 occurring in Florida and 0 in Hawaii. One has been reported in Australia, zero fatal. Zero unconfirmed bites, worldwide, not included in the total count.