Stephen Pateman is the latest Australian fisherman to haul in a big river bull shark in Australia.

He caught the shark in the Clarence River system near the Lawrence area.

A description on the Yep, I’m On Fishing Facebook page says the shark was released unharmed. This one took two and half hours to reel in and was released. 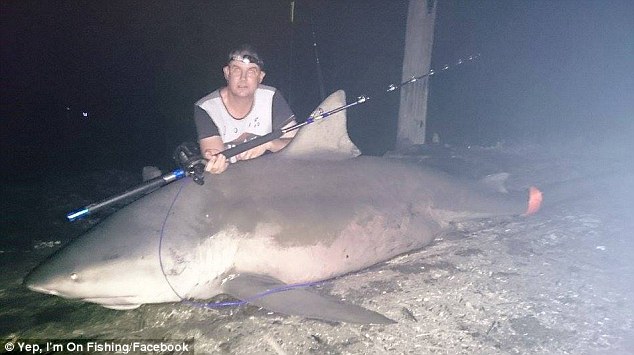 In December of 2015 fisherman Denis Rivers reeled in his own river bull shark from the Hastings river system.

His was also a 10 foot long shark that was estimated to weigh in at over 550lbs.

The female shark was pregnant and is believed to have been traveling upstream to give birth.

The Yep, I’m On Fishing group also participates in a tagging program.

Taking measurements that are connected to the tag placed on the shark.

In the event the shark is caught again, officials can compare the data to establish movement patterns and growth rates.

A little background info on the river bull shark

Bull sharks can be found in oceans, lakes and rivers including both fresh and saltwater.

In the United States bull sharks have been found in the fresh waters of the South.

In August of 2014 a young man was bitten by a bull shark while swimming in Lake Pontchartrain in the state of Louisianan.

A 5ft bull shark was caught in the same lake in August of 2015 with some fisherman saying it’s normal to catch sharks in the lake.

Speaking of lakes, Brisbane’s Carbrook Golf Club in Queensland, Australia actually had 6 bull sharks that lived in the center of the course.

Bull sharks are known to feed in shallow murky waters, including where fresh water meets salt.

If swimming in waters where bull sharks are known to live, do not swim at dusk, dawn or night.

Sharks feed at these times and could mistake a swimmer as an injured fish.