A shark bit a surfer on the foot January 5 near South Point in Gracetown, Western Australia. 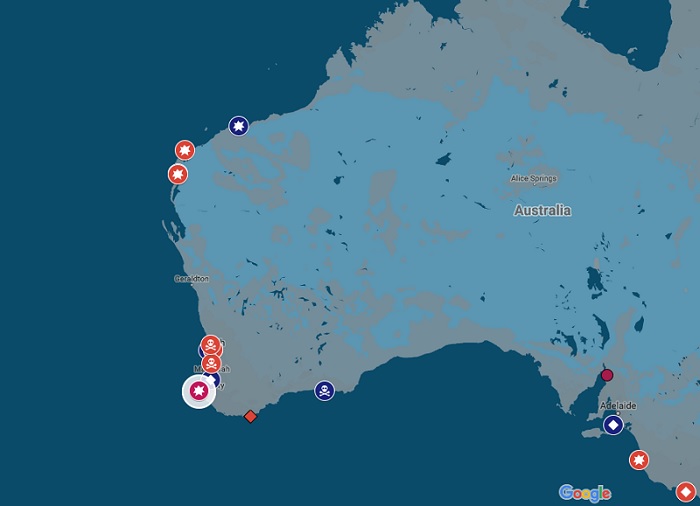 The man, only identified as Justin, was surfing before 6 p.m. when a shark took a small chunk from his foot.

“We were out the back of South Point and I heard Justin flapping about in the water,” witness Andy Gradisen told Perth Now.

Once Justin was back on the beach he was treated by an off-duty nurse.

“He put his foot up and he was bleeding quite badly,” Gradisen said.

“It was quite difficult to get him in because he was a little bit confused and so needed a little of encouragement to paddle but we got him in eventually.

“(He) was super lucky, it must have been only a smallish shark and it has only taken a small chunk but it could have been anything.”

Justin was transported to the Margaret River Hospital and was released the following morning. It is believed he was heading to Perth for further treatment.

The species of shark involved has not been identified, but is thought to have been a wobbegong or small copper shark.

This is the first reported shark attack bite of 2018.

Gracetown was also the site of a great white shark interaction in 2017.

On September 25, an unidentified woman and off-duty lifeguard Tom Van Beem were the only two surfers in the water at North Point around 6 p.m.

“I felt this water movement underneath me,” Van Beem told ABC news. “I looked at the girl sitting next to me [and] she got knocked off her board.

“Then I saw the shark’s body follow with the pectoral fin and the tail.”

Van Beem checked to make sure the Belgian woman, who is in her 20s, was okay and the two quickly headed back to shore.

“I just put my head down and paddled as fast as I could,” he said. “I had this sinking feeling that it was going to hit me, but luckily enough we made it to the rocks. We were all pretty shaken up. We’re just lucky to be here.”

The woman was uninjured, but was shaken up.

There have been a total of 1 shark attack bites in 2018, 0 of which were fatal; 0 were reported in the US, with 0 occurring in Florida and 0 in Hawaii. One has been reported in Australia, none of which was fatal. Zero unconfirmed worldwide and not included in the total count.