Video of a bull shark attacking a fishing boat off Florida has been shared on social media.

Josh Jorgensen was fishing for blacktip sharks off the coast of Palm Beach on March 16, 2017 when he decided to fly his drone.

The host of BlacktipH fishing spotted a bull shark with two cobias in tow. He quickly phoned his friend Carl Torresson to recommend he come fish for the cobia.

Jorgensen’s friend took his advice and quickly boated to the area, which was approximately 300 yards from the beach.

Torresson began fishing for the cobia around noon by tossing hooked bait near the cobia and soon got a strike.

“I hooked one of the cobias, but ended up pulling the hook loose because the boat drove over the fish. It was just one of those things that didn’t work out,” Torresson said.

The owner operator of Slob City Charters continued fishing for the cobia with guidance from Jorgensen.

Torresson continued, “About 25 minutes later, we were trying to get the other cobia to bite, but that one wasn’t cooperating. All of a sudden, the shark attacked the boat.”

The force was so great that Torresson thought his father might have backed the boat into something solid.

Torresson said, “I knew we weren’t near a reef or anything, and I simply thought my dad had slammed into a rock pile or something. 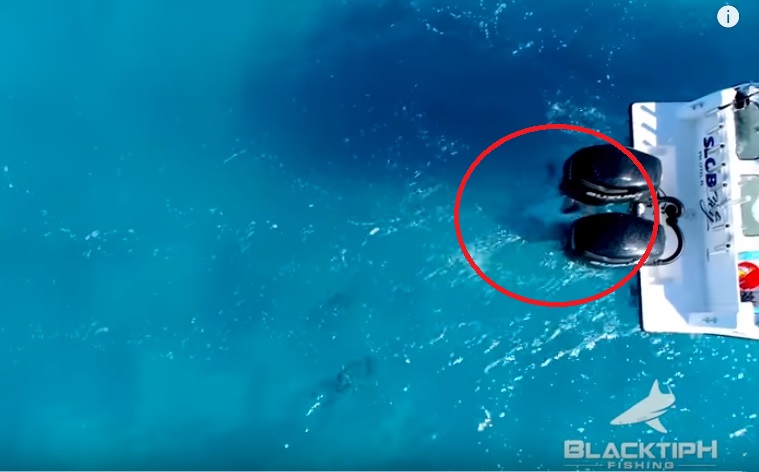 “It attacked the boat multiple times, but I wasn’t in fear for my safety. I’m in a big boat.”

The shark, which Torresson believes was around 10 feet long and at least 500 pounds, hit the boat repeatedly, concentrating on the middle portion of the motor.

He said. “I didn’t think it was doing much damage to my motor. I thought it was just biting the prop.

“It bit with such force that it removed a large chunk of the motor’s plastic covering. I don’t even know where the chunk went. The shark could have eaten it for all I know.”

Once Torresson made it back to the dock, he saw the damage.

“I didn’t know it was that bad until we got back to the ramp and my trim tab was hanging down all the way. The motor had the middle section taken out,” he said.

While the shark caused $800 in damage to the boat, it also left some lingering questions.

Why did it attack? Sharks, including great whites, have been filmed biting motors before, but normally it is an investigative bite and much closer to the propeller. This is due to the electrical signals given off by the motor. However, this was more of an attack, and at higher point on the motor.

Torresson said, “We have had sharks bite our boat and it’s usually the prop every time, never the mid-section. That fish was literally trying to bite the top of the boat.

“There was no chumming going on, and no scent in the water that could have caused the shark to bite.”

The crew of Slob City Charters is quite familiar with sharks.

“We see them every day,” Torresson said. “They are becoming a huge nuisance. If you stop anytime on the Juno Ledge, the sharks will come underneath your boat when you are drifting.

“When you hook a fish, there is a lot of pressure to reel in the fish quickly in order to keep it from the sharks. It’s become a huge nuisance.

“It’s to the point that I don’t like to fish there anymore. And, it’s definitely caused issues, because now we are having lots of sailfish killed. The sharks are getting so aggressive that they are coming up and taking a bite of a hooked sailfish, and it’s happening a lot,” he said.

There have been rumors that shark diving boats might be using chum to attract sharks for their clients. In 2015, a dive boat captain received a $1,500 fine, 100 hours of community service and one year of probation when he was charged with feeding sharks in Florida.

The practice is illegal in Florida’s waters, as some believe the process will condition sharks to approach boats for food.

When asked, Torresson choose not to comment on that particular aspect of the situation, stating that the issue is one for law enforcement to handle.

Once Torresson has his boat repaired, he will return to the water, helping clients fulfill dreams of landing beautiful Florida fish. And, he is always open to receiving tips for locating fish from Josh Jorgensen.

“That [shark attack] would have never been seen if Blacktip Fishing hadn’t been filming or looking for fish to be caught,” he said.

There have been a total of 12 shark attack bites* in 2018, 0 of which were fatal**; 0 were reported in the US, with 0 occurring in Florida and 0 in Hawaii. Seven have been reported in Australia, none of which was fatal. One unconfirmed worldwide and not included in the total count.

*Four with no injury ****one possible scavenge