Two shark bites have been reported in Florida, with a third incident off the California coast.

A surfer was riding a wave into the beach at Ponce Inlet when the wave died out in ankle-deep water.

The 29-year-old Edgewater resident had just hopped off his board when he was bitten on the toe by a 3.5-foot shark. The minor cut from the bite did not require further medical treatment. Several bystanders said they saw a shark cruising the area looking for mullet.

A second bite occurred near Patrick Air Force Base. 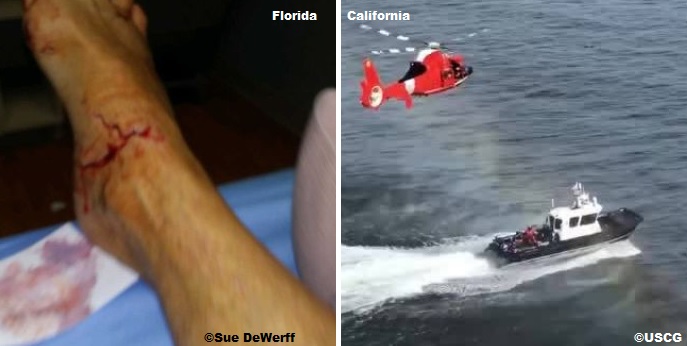 Sue DeWerff was surfing near 2nd Light Beach in the early afternoon when she was bitten on the right foot.

“I’m fine,” the Florida Today freelance writer reported. “Just screwed up my right foot. People from Idaho came to my rescue. So nice.”

Even though the 3- to 4-foot shark frightened Dewerff, she was able to paddle back into shore.

“I’m very lucky. Another guy said he saw spinners [Carcharhinus brevipinna] but I did not see it. Only felt it and knew immediately. I was bleeding, managed to paddle in. And got help,” she said.

The third shark bite was reported near the Farallon Islands off the California coast.

Ron Elliot was diving while filming wildlife in the area when he was bitten by a shark.

The commercial diver and documentary filmmaker had just entered the water when a 17-foot female white shark swam towards him.

Unlike previous encounters with other whites, this one continued straight towards him. He pushed his camera out to fend off the shark, but it wound up biting his right hand and arm.

He was able to exit the water before the shark made a second pass and request assistance from a nearby search vessel.

A U.S. Coast Guard helicopter was dispatched to the vessel NorCal 1 and picked up Elliot around 1 p.m.

He was taken to the Stanford Medical Center where he received treatment for damaged nerves, tendons and muscles.

“I’ve been making my living diving for sea urchins since 1978. I know my wife, when I first started diving out there, I knew she was wondering what would happen if something did happen to me and nobody else was on the boat. If I did get bit, the odds of somebody being there to help me are next to nil, but that doesn’t stop me from doing what I’m doing,” Elliot said in the film “Devil’s Teeth.”

Last month a young lobster diver was also bitten by a shark in Southern California.

Keane Hayes was hunting the crustaceans with his church group, when an estimated 10- to 11-foot great white shark grabbed his upper body.

The 13-year-old was able to surface and swam to a kayak with the help of some good Samaritans.

He was transported to the hospital by helicopter and should make a full recovery.

There have been a total of 86 shark attack bites (62 with injury, 19 of which are considered provoked*) publicly reported and verified in 2018. Four fatal**; 33 were reported in the U.S (including one fatal), with 13 occurring in Florida and 3 in Hawaii. Nineteen have been reported in Australia, none fatal. Eight unconfirmed bites, worldwide, not included in the total count.